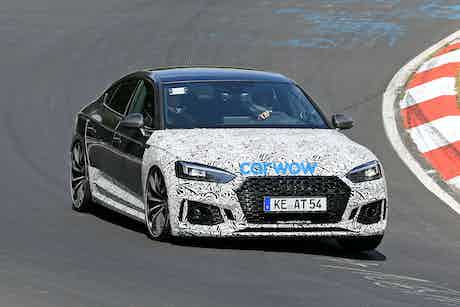 The updated Audi A5 Sportback has been spotted testing ahead of its full reveal. Here’s everything you need to know about it.

The new Audi A5 Sportback five-door coupe is likely to be revealed this autumn and should be on sale towards the end of the year.

It will be priced from around £35,000, so the entry point of A5 ownership will be a few thousand pounds more than for the cheapest A4 (on which the A5 Sportback is based). It’s been photographed here testing in hot RS5 guise, but the revised looks and technical updates will apply to the whole model range.

Although it’s a revision rather than an entirely new model, the updates to the A5 Sportback actually run quite deep. Most notable are the redesigned front and rear. Although disguised on the car in these pictures, the larger grille and extra ‘breather’ vent strip just above it are clear. You can also see LED headlights (which may also be joined by optional laser LEDs). Below the grille and headlights, the A5 will get a redesigned bumper with vents that direct the airflow around the car’s front wheels. The redesign of the front is echoed at the back with redesigned lights and a new-look bumper.

Also visible are pronounced creases above the wheel arches, a touch that runs increasingly through the Audi range and intended to express power and to reference Audi’s Quattro all-wheel-drive heritage.

Significant changes will be made to the A5 Sportback’s cabin over current models. A digital instrument binnacle will be standard across the range, as well as a large central touchscreen that supersedes the rotary-dial MMI controller. The MMI made cycling through menus easier when driving, meaning you’ll now have to rely more on the somewhat haphazard voice recognition system.

2020 Audi A5 Sportback engines and performance

There are big changes afoot under the A5’s skin, not least that S5 models will now be diesel rather than petrol-powered. The controversy surrounding diesel emissions makes this seem like a strange move, until you see the stats. In the S4, the 3.0-litre diesel produces 347hp and can crack 0-60mph in 4.7 seconds yet return fuel economy of nearly 40mpg – expect the S5 to return almost identical figure. The impressive frugality comes about thanks to 48V mild-hybrid technology which allows the Audi to coast with its engine off on the motorway and when slowing to a stop.

RS5 models, like the one in these pics, will keep the same 450hp twin-turbocharged 2.9-litre V6 that’s fitted to the current model.

Want stylish looks without the high running costs of a fast version? Then you’ll still be able to choose from a variety of 1.5 and 2.0-litre petrols and 2.0-litre diesels and a less performance-orientated 3.0-litre V6 diesel.

Bookmark this page to stay up to date on the new Audi A5 Sportback.