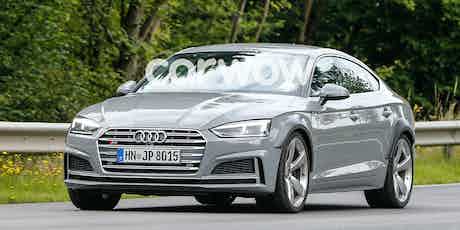 Audi has been spotted testing a five-door Sportback version if the RS5 – it’ll use the same 2.9-litre turbo V6 as the coupe

The Audi RS5 Sportback has been spotted testing using lightly disguised S5 body panels. This new five-door model will trade a fractional weight penalty over the RS5 coupe for improved rear passenger space and cabin access, while keeping the hatchback boot opening that makes the conventional A5 Sportback so easy to load.

If you don’t want to wait for the new RS5 Sportback, check out carwow’s latest savings on our car deals page. Click ‘login’ in the top-right-hand corner to sign up and configure a new car or browse our extensive range of new, nearly new and pre-reg stock cars.

The test car seen in these images isn’t representative of the final model, instead wearing S5 bodywork with odd, tacked-on wheelarch extensions. The front grille will swap the chrome bars for the sportier honeycomb grille used on the RS5 coupe. It’s likely the RS5 will sit closer to the ground and will have a deeper front bumper with prominent quattro badging.

At the back, huge oval exhaust pipes are visible and look similar to the exhaust systems employed on other Audi RS models. The rear bumper will be taken straight from the RS5 coupe and will have a more pronounced diffuser between the exhausts. The RS5 Sportback will have swollen wheelarches compared to the S5 to accommodate a wider track for better cornering grip.

The Sportback’s interior is expected to be exactly the same as the coupe’s, save for the addition of back doors and more legroom for rear passengers. A flat-bottomed steering wheel and RS badges remind you of the car’s immense performance, while touches such as red contrast stitching, carbon fibre trim and Alcantara on certain touch points help the cabin feel upmarket.

A special RS version of Audi’s Virtual Cockpit will be fitted to in place of the traditional dials showing key car information, sat-nav instructions or performance figures. Buyers will also be treated to the firm’s MMI Plus infotainment system with Bluetooth connectivity and a WiFi hotspot to keep kids entertained on long journeys.

Fans of the last RS5 may bemoan the lack of a throaty V8 engine, but the RS5’s new 2.9-litre twin-turbo V6 has more power and torque than the outgoing RS5. It’ll hit 62mph from rest in a supercar-baiting 3.9 seconds and go onto a top speed of 155mph or 174mph if you pay for an extra performance pack.

The only gearbox option is the slick, fast-shifting eight-speed automatic from the RS5 coupe, mated to Audi’s quattro all-wheel-drive system for immense grip and traction. Adjustable dampers will also feature ad let buyers choose between a softer or stiffer suspension depending on whether they’re on a B-road or their daily commute.

The RS5 coupe costs from £62,900 but it’s likely that the Sportback will command a roughly £1,500 premium thanks to its extra doors and enhanced practicality. It could emerge before the end of 2017 but is unlikely to go on sale before 2018.