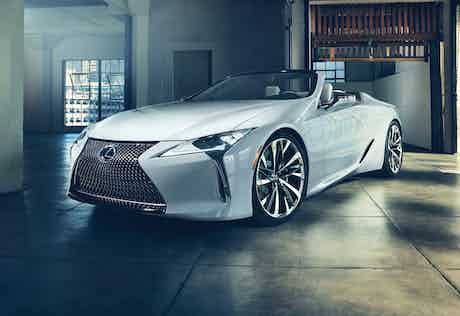 The Lexus LC Convertible Concept will make its world debut at the Detroit motor show on Monday (14 January), three years after the company launched the stunning LC coupe at the same show.

Despite the ‘concept’ moniker, it looks so production ready you can expect the car to hit showrooms soon if it proves a hit at the show.

For now, though, we only have video and pictures, none of which actually show the car with its roof up so whether it’ll get a lightweight fabric top or a folding-metal lid has yet to be confirmed. But if it’s the latter, Lexus has done a brilliant job of hiding such a roof’s inherent bulk. Either way, anything that brings your ears closer to the coupe’s screaming 5.0-litre V8 – let’s gloss over the wimpy hybrid model – is a winner in our book.

Much like the pictures, the press releases’ text is short on meaty detail, but clearly the LC Convertible Concept will share its origami styling with the coupe which, you’ll agree, is one of the best looking cars you can buy for less than £100K.

The same goes for the Lexus’ interior, which could teach posh brands like Ferrari and Maserati a thing or two about quality, but without having the yawn-inducing, samey design you’ll find in an Audi. What’s less positive is that you also get the coupe’s infotainment system that’ll have you pulling your hair out quicker than reading the fact-less quotes from Tadao Mori, Chief Designer of the LC Convertible Concept.

Well… maybe not. He says:

“This concept takes the unmistakable design of the LC coupe and reimagines it as a future convertible. It blends all the best aspects of the original coupe with the dynamic design of an open-air convertible.”

“A production version of this concept would be exhilarating in many different ways. You would see its dynamic lines as you approach, hear its engine when you start it up and feel everything around you once on the road. It would engage the senses in an exciting way, every time you get behind the wheel.”