Hyundai i40 updated – pictures and specs 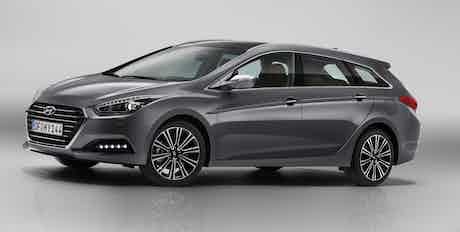 The Korean marque says that the original i40 went a long way towards moving the brand’s previous budget image a little further upmarket, and with the new model they hope it to be considered a direct rival for the Ford Mondeo and Volkswagen Passat.

The styling updates aim to reflect this premium-wards move. The front shows off a huge hexagonal front grille reminiscent of many Audis, while on either side, new headlights feature a “Smart High Beam”, which monitors traffic ahead and automatically switches to the main beams to avoid dazzling other drivers – something that’s only recently trickled down to family cars that cost a good £10,000 more than the i40.

A strip of LED daytime running lights sits beneath each headlamp unit. The rear and the side of the car remain largely the same as before, save for refreshed tail light clusters and new 16- and 18-inch alloy wheel designs.

Tweaks to the interior focus more on the brains rather than the beauty. The basic design is pretty much identical to before, but an updated satellite navigation system has been installed which introduces improved touchscreen functionality and improved graphics. The sound system is also improved, and now features DAB digital radio on higher spec models.

The i40 has been fitted with Hyundai’s Advanced Traction Cornering Control, which in essence is an electronic differential, directing power to the wheel that will benefit most during cornering, increasing traction and handling agility. The Tourer will also be enhanced by a new electronic damping system on the rear axle, which will help to keep the handling more consistent, even when hauling heavy loads.

There are two variants of the same 1.7-litre turbo diesel engine on offer. Thanks to tweaks which apparently improve the efficiency, they offer 113hp and 207lb ft of torque in the base model, and 139hp and 251lb ft in the more potent version. Both units are now equipped with stop/start technology, and active flaps in the front bumper close when cooling is not needed in order to improve efficiency. Fuel economy can be further improved with the new seven speed dual clutch transmission, available only on the 139hp engine. The standard gearbox for both engines is a six-speed manual.

When can I have one?

The i40 is expected to go on sale within the first few months of 2015, and while no details of prices have been revealed yet, they will likely remain very similar to the previous model.