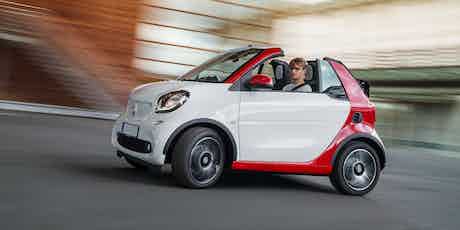 Smart has announced full details and prices for its new fortwo cabrio. The convertible version of the tiny city car features a retractable fabric roof which can fully retract in just 12 seconds.

For a true roadster-like experience, the roof side bars are removable too, and can be stowed away in the folding boot lid so cargo space isn’t compromised. The roof can be finished in either black or red, the latter being a £115 option.

The Proxy costs the same as the Prime, and features 16-inch alloys, a colourful blue/white cloth interior, a leather steering wheel and sports suspension riding 10mm lower than standard. A chrome exhaust tip rounds off the changes.

Like the roofed version, the fortwo cabrio is available with a choice of two engines. A 71hp 1.0-litre or a 0.9-litre turbocharged petrol with 90hp can be combined with either a five-speed manual gearbox or a six-speed dual-clutch automatic – the latter a £995 option. The most frugal 0.9-litre version returns a claimed 67.3mpg, with the 1.0-litre close behind at 65.7mpg.

The Smart fortwo cabrio will be priced from £13,265 – a £2,140 increase over the equivalent standard fortwo. Deliveries are expected to start in early 2016.