News Lexus LC500h hybrid – what you need to know

Lexus LC500h hybrid – what you need to know 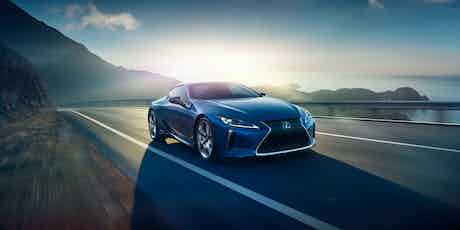 Lexus will debut a hybrid version of the recently revealed LC coupe at the 2016 Geneva Motor Show. We expect the LC500h to feature the 3.5-litre V6 from the RX, connected to an electric motor to boost both performance and emissions.

While Lexus hasn’t revealed the LC500h’s specific specifications, it says the model “will provide higher performance, more driving pleasure and greater efficiency” compared to the brand’s older hybrid systems. These were criticised for being slow to respond and noisy under hard acceleration.

The new car will feature extensive use of lightweight, high strength metals for key components including the chassis and suspension. Customers will also be able to spec the car with a carbon fibre roof, rear spoiler and 21-inch alloy wheels.

The non-hybrid LC500 is powered by the same 5.0-litre V8 as the RC F and GS F and makes 467hp and 389lb ft of torque. The hybrid model will use a smaller engine connected to a 10-speed automatic gearbox and Lexus’ new hybrid system to offer similar performance as its thirstier sibling.

Like the LC500, the LC500h will feature the company’s latest infotainment system as well as an all digital instrument cluster. Both cars are based on the company’s new rear-wheel drive architecture that will underpin many forthcoming models.

Lexus describes the interior as “both cockpit-focused and elegant” and features extensive use of leather and alcantara. The button count will be lower than previous Lexus models because more functions will be handled via the infotainment screen.

We expect the LC500 and LC500h to go into production in 2017 with order books expected to open later that year. We’re assuming the non-hybrid model could cost up to around £80,000 so this hybrid version could be priced around £100,000.

Take a look at our new car deals pages to see just how much carwow could help you save. If you need help picking your next car, check out our car chooser to narrow down your search.