Facelifted Lexus IS – spot the difference 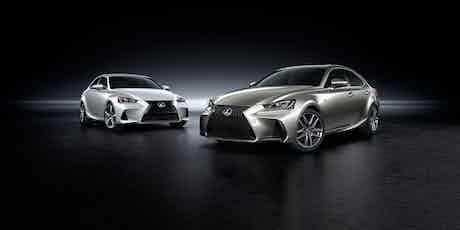 The Lexus IS has been facelifted for 2016 to include new styling elements and upgraded interior features. Find out exactly what’s new here…

The new Lexus IS has been shown to the public for the first time at the 2016 Beijing Auto Show. This facelifted model benefits from new a subtly restyled exterior and some upgraded interior features. Read on to find out exactly what’s new…

If you can’t wait to get you hands on a new car, there are some great deals to be found using our Lexus IS configurator. If you’re not sure what car to buy, our deals pages and car chooser tool are here to help.

The new IS differs only slightly from the outgoing model. The same ‘spindle’-shaped grille gets a slightly thinner chrome frame and new black horizontal strakes while F-Sport models benefit from a black mesh-effect plastic insert instead. The headlights’ internal components have been redesigned and the large air intakes either side of the grille are now taller and more elegantly curved.

The most obvious modification made to the new IS’s cabin is the new 10.3-inch infotainment screen. More than three-inches larger than the current model’s screen, this system boasts physical buttons on the centre console to control key functions – Lexus claims this will make it easier to use than the old model.

Overall, changes made to the new IS’ interior are minimal. Prospective buyers are unlikely to notice the new markings on the dashboard-mounted analogue clock – but the centre console has been revised to feature new cupholders and leather-trimmed elements in a new grey colour.

New Lexus IS engine and driving

The new Lexus IS’ range of engines will remain the same as the current model. Buyers will be offered a choice of either IS 300h hybrid or IS 200t turbocharged four-cylinder petrol options – the latter will come with the same eight-speed automatic gearbox as the NX crossover while the former gets a CVT auto.

Lexus has introduced a number of new safety systems for the IS, including pre-collision detection, lane departure warning, steering assist, automatic high beam assist and radar-guided cruise control. It’s unlikely, however, that all these features will be fitted as standard to entry-level models.

Lexus hasn’t confirmed when the new IS will go on sale but we imagine it’ll be available before the end of 2016 priced approximately the same as the current model. Entry-level cars should cost slightly less than £30,000, while top-of-the-range F-Sport models could cost nearly £40,000. Upon its release, be aware that hybrid models can either avoid or incur road tax based on the size of their alloy wheels – larger ones cause the car to emit more CO2.

Save money on your new Lexus IS

If you can’t wait for this new car to go on sale, use our Lexus IS configurator to get a great deal on the current car. If you’re not sure what to buy, check out our deals page and car chooser tool for some help in making your decision.