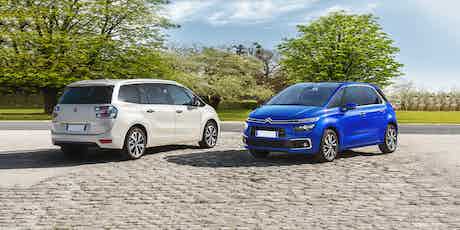 The Citroen C4 Picasso and Grand C4 Picasso MPVs have been refreshed for 2016. Discover what’s new with our side-by-side comparison

The Citroen C4 Picasso and seven-seat Grand C4 Picasso are two of the most capable MPVs on sale. Their futuristic styling, a comfy cabins and acres of interior space help them easily compete with the likes of the Ford Grand C-Max and Volkswagen Touran.

Thanks to a mid-life refresh in 2016, Citroen looks keen to maintain a lead over its closest rivals. We compare the latest version of both the five and seven-seat models to the cars they replace.

At the front of the new model, the distinctive slim LED lights integrated into the grille remain, as do the larger main units below – the bumper, however, is all-new. The fog lamps are now integrated into a wider, slimmer front air intake, and the number plate is now housed in its own separate section. While the pre-facelift versions of the C4 Picasso and Grand C4 Picasso had minor differences at the front, the new changes now make the pair pretty much identical.

Little has changed between old and new around the back, except that the 3D-effect LED tail lights – previously only offered on top spec models – are now standard across the range. Squint really hard, and you’ll notice that the Citroen double chevron logo has been refreshed, too.

As before, the regular C4 Picasso can carry up to five people, while the longer Grand C4 Picasso offers an extra pair of seats in the back. The basic dashboard design has been carried over largely unchanged – along with handy storage bins strewn around the cabin – but new trim and infotainment features help to keep the Picasso feeling up to date against its latest rivals.

Both versions were set up primarily for comfort and the pair will feel largely the same as before from behind the wheel. The experience has been boosted, however, by a host of new driver assist and warning systems, plus a pair of new engines.

The facelifted Picassos get new driving aids to improve both safety and convenience. Driver Attention Alert and Coffee Break Alert warn when the driver is not paying attention or has been driving for too long, Blind Spot Monitoring and Lane Departure Warning systems should make motorway driving more relaxing, as will the Adaptive Cruise Control. Other gizmos, including Active City Brake and Traffic Sign Recognition should ensure the Picasso maintains its excellent rating in Euro NCAP crash tests.

The new Picasso lineup keeps all the current petrol and diesel engines, but two new options are added to the range. The 1.2-litre ‘Puretech’ turbocharged petrol, in 128hp form, can now be paired with a six-speed automatic gearbox, while a 108hp version of the same unit is offered in the smaller five-seat Picasso.

Official prices have yet to be confirmed, but are expected to rise slightly from the current car’s £18,495 (£20,195 for the seven-seat model). First deliveries will take place in September 2016, with order books opening in June.