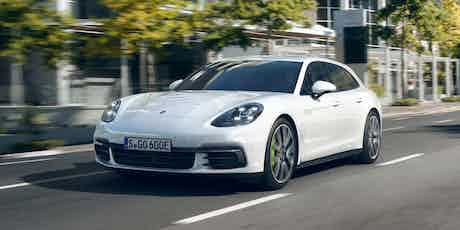 The new Porsche Panamera Sport Turismo aims to pair luxury and practicality in a slinky, sports car body. This more spacious alternative to the standard Panamera hatchback is on sale now priced from approximately £83,500. The lack of a comparable entry-level model means it’ll set you back nearly £20,000 more than the most affordable Panamera hatchback.

The new Panamera Sport Turismo looks remarkably similar to the concept version Porsche first rolled out in 2012. Its long, sweeping roof and more upright rear windscreen hint at its larger luggage capacity while taller doors and larger rear windows suggest passengers may be a smidge more comfortable in this new shooting brake than in the standard car.

Thankfully, the standard Panamera’s smart front end and elegant brake lights have been carried over mostly unchanged to the Sport Turismo while similar air vents and strong creases run down its sides, too.

A new rear spoiler sits above the rear windscreen and can be adjusted to deliver as much as 50kg of downforce to the rear wheels. This helps stabilise the car at speed and make the best use of the available grip on slippery road surfaces.

The Sport Turismo’s boot is 20 litres larger than the saloon’s with all the seats in place and 50 litres larger with the rear seats folded. If you remove the rear-seat headrests, you’ll be able to slide as much as 1,390 litres of luggage into its flat load bay – 95 litres more than the hatchback. Hybrid models are limited to carrying 1,295 litres, however, as a result of their underfloor batteries.

The Sport Turismo is offered in five guises – 4, 4S and Turbo petrol models are joined by a 4S Diesel and 4 E-Hybrid. All will be fitted with an eight-speed automatic gearbox as standard.

The Panamera Sport Turismo is on sale now priced from approximately £83,500 – Turbo models and hybrids will cost significantly more, however. The first round of deliveries is expected in October 2017.

Head over to our new car deals page to view the latest carwow offers. Not sure what to buy? Check out our car chooser tool or read our list of the best luxury sports cars currently on sale for help narrowing down your search.

Images, courtesy of Motor Authority, suggests Porsche is gearing up to launch a more practical shooting brake version of its Panamera four-door coupe. Read on for details…

If you can’t wait until 2018 to get behind the wheel of a new car, read our list of the 10 best sports cars with four seats or check out our countdown of the best luxury sports cars and GTs currently on sale.

The new shooting brake looks almost identical to the standard Panamera – from the front at least. The coupe’s broad grille, gaping air intakes and large rounded headlights have all been carried over completely unchanged.

The rear, however, boasts a more upright design that looks more like a sporty estate than a stretched executive coupe. Thanks its flatter roofline and more vertical rear windscreen, this new car looks remarkably similar to Porsche’s Sport Turismo Concept, shown above.

No images have appeared of the new car’s cabin but we don’t expect it to differ greatly from the Coupe’s slick design, shown above. A wide infotainment display will feature in the dashboard while a minimalist centre console and swathes of high-quality materials should adorn the shooting brake’s interior.

Rear seat passengers will be treated to greatly improved headroom in the new car and the shooting brake will doubtless offer a more capacious boot than its coupe cousin, too – it could even come in a long-wheelbase form for even more room.

The new shooting brake is expected to be offered in 4S diesel, S and Turbo guises. Of the two petrol options, S models will be powered by a 2.9-litre V6 producing 440hp while Turbo versions are expected to feature a 550hp 4.0-litre V8 – more than enough to truly terrify your passengers. An aluminium chassis and a system to steer the rear wheels should mean the shooting brake handles just as well as the coupe, too.

Porsche hasn’t announced any official prices for the Panamera shooting brake but we expect it to cost significantly more across the range than an equivalent coupe. Entry-level models could cost from £70,000 while range-topping versions could set you back more than £140,000.