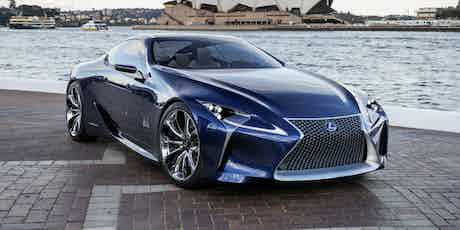 Lexus could launch a range-topping LC F sports car in 2018 powered by an upgraded version of the LC 500h’s hybrid system. It could cost more than £100,000 and would rival top-spec BMW M6 and Mercedes-AMG E63 Coupe models.

What is the Lexus LC?

The Lexus LC, shown throughout, is a large four-seater sports car powered by either a 470hp V8 or a 354hp V6 engine paired with an electric motor. It’ll go on sale in Summer 2017 and will compete against the likes of the BMW 6 Series and Jaguar F-Type.

A long bonnet, low roofline and a set of large alloy wheels grant the LC a traditional low-slung sports car appearance. We expect the upcoming LC F model to come with a myriad of extra sporty touches including larger air intakes, a deep front splitter and a number of gaping vents cut into its shapely bonnet and wings.

Its rear end could boast a collection of new exhaust tips, similar to those fitted to the existing RC F, and a new diffuser to help make it as aerodynamically slippery as possible.

The standard LC features a stylish cabin that not only looks and feels like a true luxury product, but comes with plenty of design features more akin to a concept car than a production model. The chrome door handles and vast leather-trimmed door panels look unlike anything offered by the Lexus’ main rivals.

The LC F is expected to take this impressive interior and add a selection of racy touches. In addition to a handful of F badges, it could be treated to bright red leather upholstery and carbon fibre trim to help set it apart from the standard LC.

Lexus hasn’t released any official details but the LC F is expected to be powered by either an upgraded version of the LC 500h’s V6 hybrid drive system or a turbocharged version of the 500’s 5.0-litre V8.

The first option would certainly make the LC F a unique proposition in the luxury sports car class – no other manufacturer currently offers a V6 hybrid GT car. The second could result in a tempting 600hp rival to the likes of the BMW M6 and Jaguar F-Type SVR.

Should Lexus choose to take the hybrid route, the LC F will probably come with a similar innovative gearbox system to the 500h. This model uses both a CVT automatic gearbox and a conventional torque-converter unit to deliver both seamless shifts when cruising and sporty gear changes when you put your foot down.