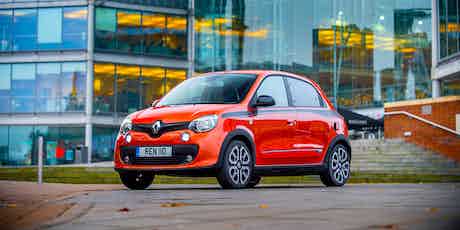 The Renault Twingo turns Renault Sport ‘lite’, but can it appeal to hot hatch owners looking to downsize?

This is the new Renault Twingo GT – a sporty little city car that aims to put the fun back into town driving with enough power in reserve for more long-legged jaunts. It has sporty looks, lowered suspension and a pokey petrol engine that’s designed to be both zippy and fuel efficient.

Well, perhaps more like a very, very low fat one…

The boffins at Renault Sport thought the GT was too tame to deserve the real-deal RS badge – even though they helped tune it – and they have a point. Although, the three-cylinder engine is rear-mounted lending a Porsche 911 flavour to the Twingo, with a distant thrum and turbo whistle coming from behind your ears.

Sadly, there’s not much ‘Porsche’ to the performance. The car’s full 110hp peaks at 5,750rpm but, most of the time, you’ll rely on the 125lb ft torque that comes in from a lowly 2,000rpm – so there’s little point in thrashing it. In terms of performance, it’ll get from 0-62mph in 9.6 seconds and haul itself to 113mph flat out – if the crosswinds don’t kill you first…

Does that mean it’s slow?

Sort of – pace isn’t something that comes naturally to the Twingo but attempting to maintain what little there is can still put a smile on your face. The GT’s suspension has been lowered by 20mm next to the normal car’s and it also has 17-inch alloy wheels – an inch bigger than you get on any other model. As a result, body roll is well contained and it feels like there’s plenty of grip.

Trouble is, the high driving position and high-sided body shape mean exploring the limits of adhesion couldn’t be further from your mind – driving this car like a lunatic just doesn’t feel natural. Factor in the long-throw, notchy gearbox and the charisma that’s so crucial in a car like this is sadly lacking from the experience.

That changes around town where, sadly, we didn’t have much chance to drive it. There, cornering composure is less of an issue and the Twingo’s quick steering and very tight turning circle lend themselves well to the job of dissecting city streets. It’s also a frugal little thing with fuel economy sitting at 54.3mpg and CO2 emissions of just 115g/km.

So it’s more show than go?

That may sound harsh, but the GT’s looks are arguably its most convincing feature. It gets side skirts, a sporty front bumper, a rear diffuser, a larger vent for the engine above the left rear wheel, a roof-mounted spoiler, and the aforementioned diamond-cut alloy wheels that fill the wheelarches well thanks to the lowered suspension. The icing on the cake, though, are the two fat exhaust pipes that hint that this is a Twingo with a sting in the tail – albeit a very light one.

Equipment levels are healthy. You get sat-nav, a reversing camera and – for some reason – also rear parking sensors. Auto lights and wipers, remote central locking, electric windows and powered wing mirrors complete the list. The standard four-year, 100,000-mile warranty isn’t to be sniffed at, either.

Should I buy one?

That depends. If you’re looking for a truly sporty new Renault, having owned the old Renault Sport Twingo or its Clio namesake, then the answer is a resounding – no! It just can’t offer the engagement or focus of its esteemed relatives. If, however, you’re looking for a sporty city car that’s nippy, cheap-to-run and relatively racy looking, then the GT ticks all those boxes.