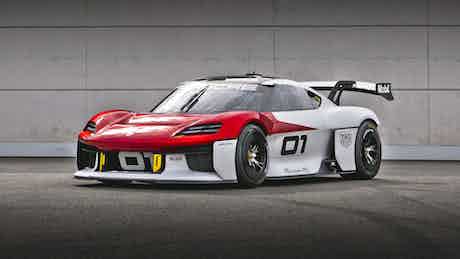 This is the Porsche Mission R, an electric car concept that previews what future racing cars from Porsche could look like. Could parts from this car find their way into future production cars? Read on for full details.

Porsche doesn’t just build road-going sports cars, it also makes racing cars that it sells directly to racing teams. Currently, these cars are mostly based on the famous 911, but this new Mission R concept shows what a future all-new electric Porsche racing car could look like.

Check out this Porsche 911 review

This isn’t just a flash-in-the-pan concept – Porsche has said elements of the Mission R will find their way into production models, which could include the upcoming 911 hybrid.

The new Porsche Mission R combines elements of the new 911 with proportions similar to the mid-engined Cayman and Boxster sports cars.

It’s a racing car, so it’s covered in aerodynamic wings, splitters and vents, many of which look like they’ve been pinched from Porsche’s 919 endurance racing car.

Although this carn won’t actually go into production, there’s a chance that some features, such as the moveable aero shutters in the front bumper, the flattened quad-lamp headlights and full-width rear light bar could appear on future production road cars.

Most of the Mission R is made from carbon fibre (as shown in the bare-bones interior, above) but Porsche has developed new technology to build race-spec splitters, side skirts and diffuser parts from natural fibres. These techniques could potentially be used to build parts for road cars in the future.

The Porsche Mission R is powered by two electric motors giving it four-wheel drive. The front-axle motor produces 435hp and the rear-mounted motor delivers 653hp. Together they produce 680hp in normal Race mode and 1,088hp in all-out ‘Qualifying’ mode.

With the latter engaged, this low-slung racer can blast from 0-60mph in 2.5 seconds and hit a top speed of almost 190mph.

The Mission R comes with an 80kWh battery, but it hasn’t been designed to complete as many laps as possible between charges – rather it’s been built to set blisteringly quick lap times over a 30 minute period. As such, Porsche hasn’t stated an official range figure but it has confirmed it uses new oil cooling tech to make sure it doesn’t overheat during hard track use.

Recharging the battery from 5% to 80% full takes just 15 minutes thanks to a new 900-volt electrical system that’s compatible with 340kW chargers.

The Porsche Mission R won’t go into production as a racing car or a road car, but elements of its 1,088hp motors and high-tech 900V battery could possibly appear in future Porsche products, such as an even quicker Taycan Turbo S or a 911 hybrid.

Not sure which is the perfect car for you? Check out the best sports cars on sale now or compare the top 10 electric cars available through carwow.