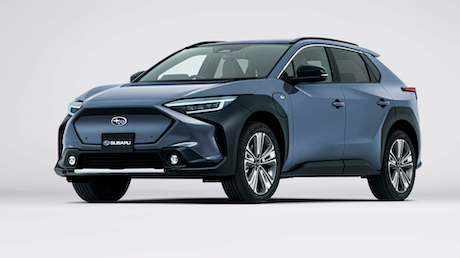 The Subaru Solterra is the brand’s first fully electric car. It’s expected to cost from around £42,000 when it goes on sale soon. Read on for full details…

The new Subaru Solterra is a completely new electric car that’ll go on sale in 2022.

It’s a mid-sized family SUV that’s an alternative to the likes of the Volkswagen ID4, the Skoda Enyaq and the Mercedes EQA.

The Subaru Solterra will go on sale globally in 2022. It’s expected to cost about the same as the new Toyota bZ4X – both cars are built using the same basic components, and will likely come with near-identical specs and with similar standard equipment.

You can expect entry-level Subaru Solterras to cost from around £42,000 – that’s how much Toyota will charge for the cheapest ‘Pure’ versions of the bZ4X. Higher-spec ‘Premiere Edition’ versions of that car will set you back £51,550 – it’s likely a top-spec Subaru Solterra will also cost more than £50,000.

This means that’s there’s a strong chance no Subaru Solterra will be eligible for the Government’s £2,500 plug-in car grant – this is only offered for cars that cost less than £40,000.

In a shock to nobody, the Subaru Solterra looks visually almost identical to the recently-revealed Toyota bZ4X. It is essentially a rebadged version of the car, after all.

Check out the Toyota bZ4X here

It does get different headlights and a front bumper though, taking on a blanked-off grille in place of the smoother front bumper on the Toyota.

The rear of the car is essentially identical, albeit without the full-width light bar of the Toyota.

Just like the Toyota bZ4X, you can have the Solterra as a front- or all-wheel-drive car.

The front-driven version produces 201hp and 256Nm of torque, with the latter serving up 215hp and 336Nm.

Each will cover 329 and 285 miles of between charges according to Japan’s WLTC standards.

The Subaru Solterra’s interior is pretty minimalist, with a 7-inch digital driver’s display placed in your eye line and a large central infotainment system. There’s a neatly-stacked row of touch-sensitive buttons underneath that.

By the looks of it, you’ll be able to have brown interior trimmings inside the Subaru too — something not confirmed for the Toyota bZ4X.

Can’t wait for this new car to go on sale? Compare the best new electric cars on sale or check out the latest Subaru deals available through carwow.