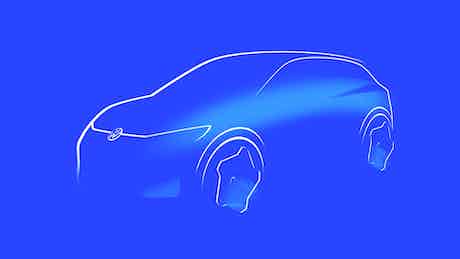 Volkswagen will build a new electric car in 2025 that’s smaller than the ID3. It’ll share parts with two other new EVs from Skoda and Cupra and should cost less than £30,000. Read on for full details.

The Volkswagen Group (which also includes Skoda, SEAT and Audi, among others) has teased the design of a new compact electric VW. This new model could wear an ID1 badge when it goes on sale in 2025.

This new car will share plenty of mechanical parts with new electric cars from Cupra and Skoda and is set to replace the now off-sale Volkswagen e-Up as an alternative to the electric Fiat 500 and the MINI Electric.

Volkswagen’s new teaser image doesn’t reveal a great deal about the new car, but you can easily spot a few similarities with the larger Golf-sized ID3 EV.

The central light-bar running through the VW badge, for example, looks just like the one on VW’s current small electric car, although the car in this new sketch has pointier headlights and a more pronounced crease running down the side above the rear wheel.

It isn’t known if this new car will come with front and rear doors, but you can get a clue by looking at the teaser images Volkswagen also shared of two upcoming Skoda and Cupra electric cars (shown below).

Both the Skoda (above) and the new Cupra (below) appear to feature boxy, four-door body styles.

The new small VW city car’s cabin could borrow features from today’s ID3 and ID4 EVs or it could lean on the ID Life concept (shown above) for a bit of inspiration.

A future compact electric car from VW isn’t expected to borrow the ID Life’s electric motor (car shown above). At 234hp, it produced around 30hp more than you get in a Ford Fiesta ST hot hatch. That’s probably a little excessive in a dinky city car…

A future VW city car could manage just fine with the entry-level 145hp motor from the ID3.

There’s a strong chance VW’s future electric city car could use a new type of battery that Volkswagen calls ‘Unified Cells’. These promise to contribute to cutting the cost of batteries (especially in small, cheaper cars) by around 50%.

Volkswagen plans to introduce these batteries in 2023 and roll them out to 80% of its cars by 2030. This makes them perfectly placed for use in the new ID1 in 2025.

The new car’s battery output could be close to the 58kWh you get in an entry-level ID3 today. Those come with around 217 miles of claimed range, but a future ID1 would be smaller and possibly lighter, helping it travel further on a single charge.

It may comfortably go further than the 199 miles of range you get in a Fiat 500 electric with its top-spec 42kWh battery.

Volkswagen hasn’t confirmed what this new car will be called but has said it’ll start production alongside new electric cars from Skoda and Cupra in 2025.

Sneak peek!🤩These are the first sketches of our smaller e-models from #Skoda, #Cupra & #VW, which will be built in #Spain from 2025. These entry level electric vehicles make the access to #eMobility easier & push the country’s future of mobility – for generations to come. pic.twitter.com/LX49mJPYB5

Being an entry-point to VW’s range of electric cars (which currently includes the ID3, ID4 and ID5, with more on the way), means the new car will be the cheapest of the bunch. Expect to pay from less than £30,000 when this car goes on sale in a few years’ time.