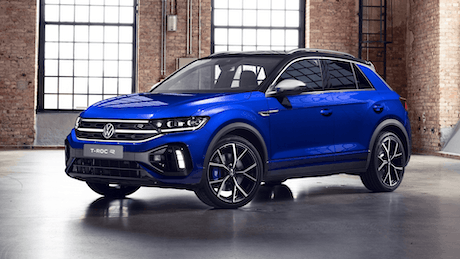 The updated Volkswagen T-Roc has been revealed, along with the high performance T-Roc R. Read on for all you need to know.

The new Volkswagen T-Roc has been revealed and is on sale now. This alternative to the Seat Ateca and Ford Puma costs from £25,000 and is also available as a high-performance T-Roc R and as a drop-top T-Roc Convertible.

All three models come with new tech and a revised design that incorporates new headlights, brake lights and tweaked bumpers.

The new Volkswagen T-Roc comes with a range of engines and in three trim levels: Life, Style and R-Line.

These versions an 8.0-inch touchscreen infotainment system, and an equally large digital driver’s display. You also get 16-inch alloy wheels an interior mood lighting as standard, along with adaptive cruise control and lane-keeping assistance.

Style versions of the T-Roc come with the same choice of engines as ‘Life’ models, but you also get the option of a 2.0-litre petrol engine with 190hp. This car also comes with four-wheel drive and an automatic gearbox as standard.

These cars come as standard with a larger digital driver’s display, sports seats, tinted rear windows and LED headlights. You also get 17-inch alloy wheels and a remodelled rear bumper to help you tell it apart from entry-level ‘Life’ cars.

In R-Line spec, the Volkswagen T-Roc comes with the same range of engines as ‘Style’ models, with the exception of the 110hp petrol and 115hp diesel units.

R-Line cars are the sportiest-looking in the standard T-Roc range, thanks to their unique 17-inch alloy wheels, black exterior trim, silver roof rails and lowered sports suspension. Inside, you get the same equipment as in ‘Life’ cars with the addition of metal pedal trims and selectable driving modes.

Though the Volkswagen T-Roc is fundamentally the same as the outgoing car, it does get a slightly fresher look.

Tweaked headlights — which can be had as upgraded Matrix LED units — are the main addition along with a revised grille and bumper.

New taillights feature as well, as does a restyled rear bumper. You’ll get the choice of new alloys wheels ranging from 16- to 19-inches in diameter.

Inside the car, each version of the Volkswagen T-Roc gets a digital driver’s display as standard as well as a 6.5-inch infotainment system. The latter can be upgraded to as large as 9.2-inches optionally.

A new steering wheel is lifted directly from the Volkswagen Golf as well, while digital controls for climate control have been introduced.

There’s no revision in the all-petrol engine line-up here, though. Power outputs range from as little as 110hp, right up to 300hp in T-Roc R guise.

The T-Roc R also gets lowered and stiffened suspension compared to the standard car, as well as all-wheel drive and a seven-speed automatic gearbox as standard