Audi A8 Audi announces the A8 Edition 21

Audi announces the A8 Edition 21 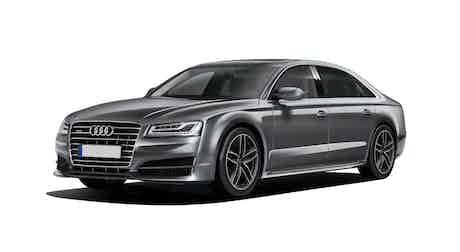 Audi has announced a limited-edition version of its A8 executive saloon, called the Edition 21. Designed to celebrate the A8 being in production for more than 20 years, only 121 Edition 21 A8s will come to the UK.

It’s designed to be one of the most opulent A8s ever, so it’s based on the top-spec SE Executive A8 with lots of extras – and you can have it as a standard A8 or a long wheelbase (LWB) version.

The Edition 21 gets a range of interior upholstery chosen from Audi’s super-posh ‘exclusive’ selection. This means you’ll be able to choose from cognac brown leather with black contrast stitching (see above), or black leather with red stitching (shown below).

You also get soft-closing doors (ideal if someone in your family has a habit of slamming them…), an electric-opening boot, a Bose surround-sound system and Audi’s advanced parking system, which will automatically park the A8 into smaller spaces than you’d think possible.

On the outside the Edition 21 gets a sportier looking body – Audi says it’s been designed to look like the super-fast 543hp Audi S8. To save on running costs, however, it’s powered by a more frugal 3.0-litre V6 diesel engine that produces 258hp – it should return 47.9mpg, or 47.1mpg if you go for the long-wheelbase version. It has an eight-speed automatic gearbox and will accelerate from 0-60mph in 5.9 seconds and on to a top speed of 155mph.

Order your Edition 21 through carwow. Or if you’d rather see what else you could get for the money then head on over to our car chooser – it’s a great way to filter through the 400-or-so cars on sale in the UK.