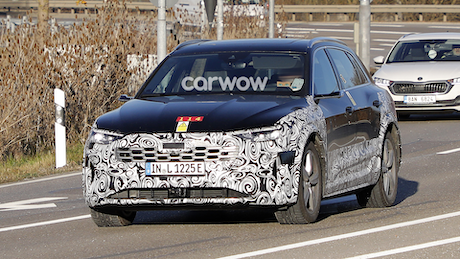 A new Audi e-tron has been spotted testing. This electric SUV is expected to get styling updates, some interior tweaks and improved electric range. Read on for all you need to know.

A disguised version of the updated Audi e-tron SUV has been spotted testing ahead of a possible reveal in 2022.

Check out the latest deals on an Audi e-tron

This alternative to the Tesla Model X and Mercedes EQS will get some styling upgrades, as well as new infotainment tech and improved electric range.

At the front, you can see some slim new headlights, as well as a refreshed grille that looks similar to the smaller Q4 e-tron electric SUV.

Expect the refreshed Audi e-tron to come with a range of new alloy wheel designs, however.

There isn’t much to report down the side of the car, however around the back the new e-tron appears to be sporting a new bumper as well as some new rear lights with an updated LED pattern.

There’s no word yet on updates to the motors or batteries in the new Audi e-tron, but it’s expected to get better range then the current car.

As it stands, today’s Audi e-tron has 250 miles of range. It’s predicted that the new car will have improved batteries and more efficient motors, which could push it closer to 300 miles of range.

There are no pictures yet of the interior of the new Audi e-tron, however you can expect to see some upgraded infotainment and a tweaked design over the current car.

Check out the latest Audi deals

The e-tron already has a very modern and high tech cabin, but the new car may get a bigger infotainment screen and some new trim options inside.

Expect to see an official announcement of the new Audi e-tron in late 2022 with deliveries starting at the start of 2023.

As for price, it’s too early to say just yet but it’s a safe bet that it will be more than the current e-tron – somewhere around £65,000.

Cant wait for this new car to go on sale? Why not check out the latest Audi e-tron deals available on the current car or compare the best electric cars on sale now.