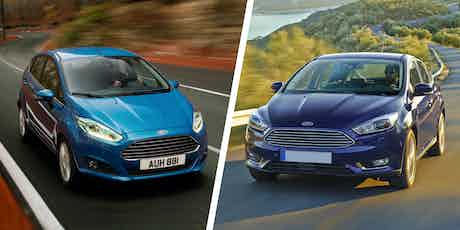 Think of a supermini, and think of a family car… The chances are the Ford Fiesta and Ford Focus have just sprung to mind, as their parent company has had both of these segments sewn up for decades.

The Focus was released in 1998 as a replacement for the Escort, which itself had been on sale in the UK since the late Sixties. The Fiesta was an original from the start, and has been with us in six different guises since its launch in 1976.

To this day, they’re both class leaders, but if you need to choose one or the other, which should go you for? The Focus is larger and more expensive, but is the Fiesta all the car you’ll ever need? We’ve compared the pair to find out.

Ford has recently taken steps to give its range a more upmarket feel, and that’s evident in the styling of both cars. Each features a large front grille, which when you glance at it brings to mind an Aston Martin. On the whole, the appearance carries class, but some might feel that the Volkswagen Golf and Polo still look like the more upmarket products.

We appreciate that this comes down to personal taste, but still feel that the Fiesta looks slightly better proportioned than the Focus and is therefore the more handsome of the two.

Both the Fiesta and Focus follow a similar design theme once you open the doors and look inside, so you’ll probably either love or hate the slightly quirky design. They feel fairly well screwed together, but the quality of the plastics can’t compete with their biggest rivals from Volkswagen.

One of the major criticisms of both cars in the past has been the sea of buttons scattered across the dash – in particular the audio controls. This was addressed to some extent during the Focus’s most recent facelift, but some might find the general appearance of both just a little fussy.

The Focus feels like the bigger car once you’re inside, but also the more enclosed, and thanks to a wider, higher centre console you feel like you’re sitting lower. Its four-spoke steering wheel is perfect to hold – which isn’t to say that the wheel in the Fiesta is bad by any means. In fact, the slim rim is a welcome change from the needlessly thick wheels imposed on many modern cars.

The back of the Focus has around 5cm more legroom and 1cm more headroom than the Fiesta, but in reality this makes little difference as the Fiesta is still fine for transporting four adults in comfort. The Focus is available with three or five doors, but those with younger families might find the three door a little bit of a pain to live with. Indeed, we’d probably suggest the five-door-only Focus is the one to have in this case.

The Focus has the larger boot of the two (316 litres against 290 litres in the Fiesta), but in truth it’s still a major disappointment relative to other cars in its class. The Fiesta’s quota is acceptable for a supermini, but the Skoda Fabia offers more space.

The Focus and Fiesta share many of the same engines across the range. Both make use of the 1.0-litre EcoBoost, which is a three-cylinder petrol turbo intended to marry big engine performance with small engine economy.

Being the lighter car, this performs better in the Fiesta, with Ford claiming 65.7mpg (61.4mpg in the Focus) and a zero to 62mph time that’s 1.5 seconds shorter than the Focus can manage. We’d say that the EcoBoost engine is definitely the one to go for if you’re buying the Fiesta, but you might want to think again if you’re considering the Focus. The 100hp, five speed variant not only suffers from turbo lag there, but the need to work it hard means fuel economy suffers, too.

One thing that the Fiesta lacks is a little refinement – a problem most noticeable in the diesel versions. Although the 1.5- and 1.6-litre units put in a strong performance and are light on fuel consumption, they sound coarse – especially compared to rivals like the Volkswagen Polo and Peugeot 208.

In the Focus, we’d recommend the 1.5-litre diesel. It’s offered in 95hp or 120hp flavours, and Ford claims it will take you 74.3 miles on a single gallon of fuel. Of course, if you’d like a little more speed, then there’s always the Focus ST and Fiesta ST to consider…

Both the Fiesta and Focus have a long-standing reputation for offering driving enthusiasts generously-sized bags of fun in a standard family hatchback – and that’s still very much the case today. They’re easy to drive too. Whichever you choose, the steering, clutch and gearshift are all light, accurate and pleasant to use.

The Focus has become more refined over the years at the expense of just a little sharpness, while the Fiesta has just got better with each generation. The current Fiesta feels composed when throwing it into a corner, it rides smoothly (at least regular models do, but the ST’s ride is too firm for some) and even entry-level versions are sure to put a smile on your face when you find the right road.

The Focus is quieter and more comfortable over long distances, which is something to consider if you clock up the miles. However, the Mazda 3 is now the most enjoyable car in its class.

Ford offers a broad range of specs for either car, from entry-level Studio and Style models (no air conditioning, wheel trims rather than alloy wheels) to top-spec Titanium models, which are packed with every gadget imaginable. Titanium Fiestas feature keyless entry and satellite navigation, while the Focus is available with an automated parking system, which finds a suitable space and takes care of the steering while you look after the pedals.

Being the smaller car overall, the Fiesta is cheaper to buy in the first place. Taking a middling 1.0-litre EcoBoost in Zetec trim as a point of comparison, a five door Fiesta costs £3,600 less than the equivalent Focus.

Based on wowscores – an average calculated from the ratings of the UK’s motoring press – the Ford Fiesta edges ahead of the Focus, scoring 8.3 to its big brother’s 8.1. We’d have to agree with the facts: the Fiesta is more fun to drive, rides just as well, is cheaper to buy and run, and isn’t much less practical. All things considered, it’s a brilliant car, and for most people it will do everything they’d ever need.

There’s still plenty to like about the Focus, though. It’s more refined than the Fiesta, and at the upper end of the range, larger and more powerful engines and extra goodies make it the better car if you’ll regularly be carrying several passengers.

There aren’t many cars that can beat the Focus. It just so happens that Ford produces one of them itself…

If you like the look of the Ford Fiesta or the Ford Focus, head over to our car configurator to see how much carwow could help you save. Or, to see more options, check out our deals page to see our latest discounts.