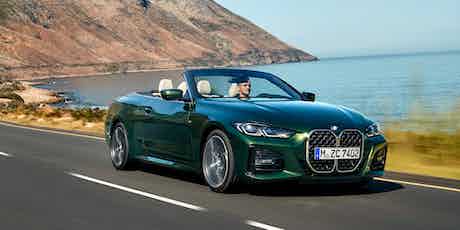 The new BMW 4 Series Convertible has been revealed. Here’s everything you need to know about it

The next version of the BMW 4 Series Convertible has been officially revealed. As you can see in BMW’s pictures, it features the same huge kidney grille as the recently-revealed M3 and M4 models as well as the normal M4 Coupe. Read on for all the latest information on the drop-top cruiser.

The most notable feature of the new BMW 4 Series Convertible is the huge grille, which has been a divisive design feature on other BMW models it’s used on. The front end also features LED lights (laser lights are optional), and a long, creased bonnet.

At the rear it’s more traditional, with a familiar rear end from other BMW models. There’s a set of sleek taillights that spread out into the boot lid. Of course, this being the Convertible model, there’s also the soft-top roof.

Previous BMW convertibles have used folding hard-tops but this new model uses a soft roof, which BMW says is 40 per cent lighter than a metal roof.

It’s fully automatic, and at the touch of a button, it can open or close in just 18 seconds at speeds of up to 31mph. BMW also says it’s quieter inside than a car with a traditional soft-top thanks to a “panel bow” design.

The BMW 4 Series Convertible’s cabin is similar to the normal 4 Series, with its digital dials and large infotainment screen on the dashboard. The leather sports seats are heated in the front, and the rear set is designed for two passengers.

In the UK M Sport trim is the entry-level car, which means all versions get sporty suspension, 18-inch alloy wheels, sat-nav, electric seats, a reversing camera and three-zone climate control.

If that’s not enough you can upgrade to the M Sport Pro Edition, which gets 19-inch alloy wheels, different headlights, adaptive dampers in the suspension and a sportier exhaust note (via electronic enhancement rather than a sports exhaust).

An eight-speed automatic is standard on every BMW 4 Series Convertible, but there’s quite a wide range of engines to pick from. There are three petrols and three diesels, some coming with mild hybrid technology.

At the top of the range, there are the M440i and M440d models. These are both six-cylinder engines, petrol and diesel respectively. The M440i is the fastest model, with 374hp, so it can go from 0-62mph in just 4.9 seconds. It’ll manage around 38mpg.

Prices for the BMW 4 Series Convertible range start at £45,785 for the entry-level model and go all the way up to £59,645 for the top-spec M440i. Expect to add even more on once you’ve added a few options, too.

While 430d and M440d models aren’t out until later in 2021, the petrol and lower-powered diesel variants will be available from March 2021.