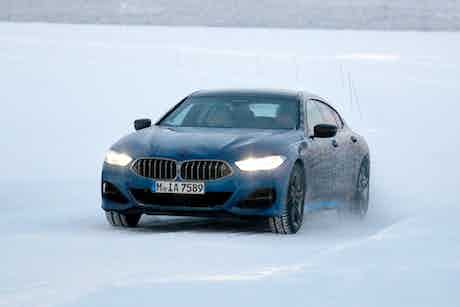 The BMW 8 Series Gran Coupe has been spotted again, this time undergoing winter testing at the company’s base in Lapland, Finland. Keep reading for the latest on the range-topping four-door.

These are the latest pictures of the 2019 BMW 8 Series Gran Coupe as it was put through its paces in Finland.

The Gran Coupe will be based on the 8 Series coupe but has been stretched to accommodate rear doors and to offer more space for rear passengers than you get in the two-door model. It’ll replace the old BMW 6 Series Gran Coupe and is an alternative to models such as the Mercedes CLS and Audi A7 Sportback.

The Gran Coupe shares all its mechanicals with the two-door 8 Series coupe so it’ll come with four-wheel drive and your choice of 3.0-litre diesel (840d) or 4.4-litre V8 petrol (M850i), with an M8 model coming soon after the car is launched.

From the front at least, the Gran Coupe looks almost identical to the two-door, which explains why BMW hasn’t made much of an effort to camouflage it. You get the same huge kidney grilles and will be able to specify BMW’s laser headlights that are so powerful it’s as if you’ve harnessed the power of two suns.

It’s much easier to spot the 8 Series Gran Coupe in profile where you can see the car’s stretched roof and sloping rear end, which incorporates BMW’s famous Hoffmeister kink and boot-mounted rear spoiler. Even from the back, the 8 Series Gran Coupe has plenty of presence courtesy of twin exhaust pipes and a diffuser-style rear bumper.

In terms of practicality, the BMW 8 Series Gran Coupe should offer enough head, leg and knee room for tall adults, although the car’s small rear windows will also make it feel claustrophobic in the back. The boot meanwhile, isn’t likely to be much more practical than the two-door coupes. Unlike the Audi A7 Sportback that has a huge opening that makes it easy to load bulky luggage, the BMW has a saloon-car style boot that’ll make the same job a pain.

Sign up to the carwow newsletter at the top of your screen to keep up to date with this and any other new-car news.