When to change car tyres 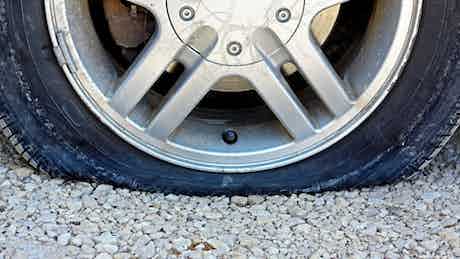 Your car’s tyres are very important, as they’re the only part of the vehicle that are in contact with the road surface. As a result, it’s crucial that you make sure your car’s tyres are in good condition, and to replace them when they’re no longer safe enough to use.

A car’s tyre may need to be replaced for a number of reasons, ranging from general wear and tear over time to more serious defects that can put you at risk of having a dangerous accident.

When should I change my tyres?

A variety of factors can result in you having to replace your car’s tyre at some point. We’ve listed below some of the most common reasons why you should fit a new set of tyres onto your car.

They’re too worn out

If you’re on a tight budget, you can use a 20p coin as a rough estimate: if the outer band of the coin isn’t obscured when you insert it into the tread groove, it may not have enough tread depth left.

There’s damage on the tyre

A tyre will need to be replaced if it’s damaged, as if left untreated you run the risk of suffering a nasty tyre failure with little or no warning.

If you can see your car’s tyre is punctured or has a crack in it, you will need to replace the tyres with new ones as soon as possible. This also applies if there are any bulges in the tyre – these can be signs of internal defects.

If your car’s tyres are worn unevenly

Usually, car tyres wear out evenly, so the tread pattern on the outer edge of the tyre reduces at the same rate as the tread in the middle of the tyre.

However, if your car’s tyres are wearing out faster on some areas than others, you’ll need to have them replaced even if the tread on the unaffected side complies with the legal limits.

You may want to have your car checked over by a qualified technician if your car’s experiencing uneven tyre wear, too.

While uneven wear can be caused by incorrectly-inflated tyres, it can also be the result of misaligned wheels or suspension, which have the knock-on effect of compromising the control you have over the car when driving.

Your car’s tyres are old

While there aren’t any legal limits on car tyre ages in the UK, you may want to consider replacing the tyres on your car if they’re getting on a bit. This is because the strenght of a tyre will degrade over time, even if you drive the car infrequently or have kept a set of unused tyres stored away somewhere.

You can find out the age of your car’s tyre by looking for a four-digit code on the sidewall – the first two digits state which week of the year it was made in, whereas the last two digits denote the production year. For example, a tyre with the ‘0120’ code on its sidewall will have been produced in the first week of 2020.

Should I run a tyre to the legal tread limit?

While you can legally drive a car with tyres that have 1.6mm of tread depth, do bear in mind they won’t have as much grip when compared with a like-for-like car on less-worn tyres.

This is especially the case when the road is wet and slippery. A tyre with less than 1.6mm of tread remaining isn’t as effective at displacing water from the road, which means less of the tyre is in contact with the road and you’ll have less grip and control as a result.

Different motoring groups have varying suggestions as to when you should ideally replace your car’s tyres. For instance, the AA suggests you should consider replacing your car’s tyres when they have around 2mm of tread depth left, while the Royal Society for the Prevention of Accidents recommends drivers should change their car’s tyres once the tread depth reaches 3mm.

What happens if I don’t replace my car’s tyres in time?

Not changing your car’s tyres in time puts you at greater risk of having a crash. The reduced tread depth means they aren’t as grippy as tyres with more tread in slippery conditions.

When it’s very wet, a car with 1.6mm or less tread depth runs a higher risk of aquaplaning, which is when the car’s tyre loses contact with the road due to the amount of surface water.

Because the tyre is no longer touching the road, it severely limits the amount of control you have over the car’s braking and steering, which can result in you having a very serious accident.

Any car that has less than 1.6mm of tread depth left also will automatically fail its MOT test and won’t be allowed onto the road again on safety grounds. This applies to other potential tyre defects, such as a crack or bulge in the tyre’s sidewall

You run the risk of a hefty financial hit if you don’t replace your car’s tyres in time, too.

If the police catch you driving a car that doesn’t have the legal amount of tread depth left, you can be fined £2,500 and receive three penalty points on your licence per tyre.

Should all four of your car’s tyres not meet the minimum limit, this also means you’ll receive an automatic driving ban and will need to retake your driving test before you’re allowed on the road again.

Where can I get my car’s tyres replaced?

To replace the tyre itself, you will likely need to either have your car checked over at a garage, or call-out for a roadside mechanic. This is because removing a car’s tyre from the wheel rim and fitting a new one requires specialist equipment.

Many new cars nowadays come with a tyre inflation kit, which allows you to fill up a punctured tyre with foam to make it sturdy enough for the car to be driven a short distance to a nearby garage.

How long should a car’s tyres last?

There’s no definitive answer to this, as it depends on a number of factors – drive aggressively, for instance, and you’ll wear the tyres out faster. As a rule of thumb, a car’s front tyres should last at least 20,000 miles, whereas you should get more life out of the rear tyres before they need replacing.

Do I need to replace all of my car’s tyres at the same time?

How much will it cost to replace my car’s tyres?

Prices for car tyre replacements vary, depending on the type of car you have and how many tyres need replacing. The type of tyre that needs replacing can also have an impact on cost (generally, a mainstream car tyre will be more affordable than a performance-oriented one) and prices can vary depending on the brand of tyre, too.

Drag race: Nissan Skyline GT-R R32 vs R33 vs R34 vs Nismo GT-R R35
The best alternatives to the Mercedes A-Class
What is Alcantara suede? Is it worth it?
Do electric cars need servicing and MOTs?
10 best cars with a high driving position
What is a speed limiter on a car?
Drag race: Mitsubishi Evo VI Vs Subaru Impreza P1
New BMW 3 Series revealed: prices and specs confirmed
How is the Russian invasion of Ukraine affecting the global car industry?
Peugeot Allure trim: What is it and is it worth it?
Drag race: Audi RS5 vs BMW i4 M50
Understeer vs oversteer: What’s the difference?
Lamborghini Aventador generations drag race
Pedestrian crossings in the UK explained
10 of the best drift cars