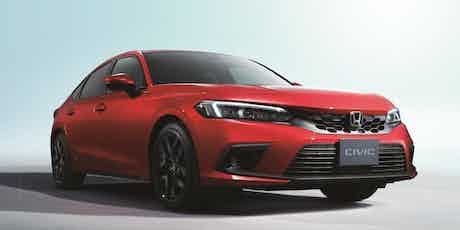 The hatchback version of the latest Honda Civic has been revealed, complete with a brand-new hybrid engine. Read on for full details.

The UK-bound Honda Civic hatchback has been revealed, following on from the saloon model revealed earlier this year.

Honda has also confirmed details of this new car’s hybrid engine options, interior tech and advanced safety kit. Read on for full details of this upcoming alternative to the Ford Focus, Vauxhall Astra and Volkswagen Golf.

The new Honda Civic hatchback takes on much of the same styling elements as the saloon. It has a near-identical boxy face, with thin rectangular headlights flanking a mesh grille.

See the best hatchbacks on sale

The side profile is largely similar to the old Civic’s although the new car’s roofline slopes even more to give it a four-door coupe silhouette.

You’ll certainly never mistake this for a traditional boxy hatchback such as a Ford Focus or Volkswagen Golf.

Changes at the back are a little more drastic. The new car has completely different brake lights that are connected by a light bar that stretches the full width of the bootlid. There’s a new rear bumper, too, with a set of (likely fake) chrome exhaust tips.

The new Honda Civic’s interior looks completely different from the old car’s, too.

Check out the latest Honda deals

The infotainment system has been moved to the top of the dash rather than being placed centrally within it as in the old car. There’s also a new honeycomb trim piece now cutting straight through the middle of the dashboard that neatly covers the car’s air vents.

That new infotainment system is 7-inches as standard and comes with Apple CarPlay and Android Auto.

A new 10.25-inch digital driver’s display is available, along with a new steering wheel design that looks less chunky than in the old car.

The new Honda Civic will be offered as a hybrid. This uses a 2.0-litre petrol engine paired with a couple of electric motors to deliver an impressive 184hp.

Honda says this new Civic ‘E:HEV’ hybrid will return around 56mpg and emit less than 110g per kilometer of CO2. That means it’ll cost £160 per year to tax in the UK.

It sends its power to the front wheels through a CVT gearbox, which works similarly to an automatic albeit with a single ‘gear’. This helps to optimise revs for efficiency or performance depending on how you’re driving.

As with the old Civic, there’ll be a high-performance Type R version along later. See what it could look like in the video, above.

No word yet on how much the Honda Civic hatchback will set you back but expect it to have a slight bump over the current car’s £21,700 asking price to compensate for the new hybrid engine setup.

Sales are set to start in autumn, so it shouldn’t be too long before you can put your name down for a new hybrid Honda Civic.

Can’t wait that long? See how much you can save on a range of new cars or see how easy it is to sell your car through carwow.
Help me pick my next car