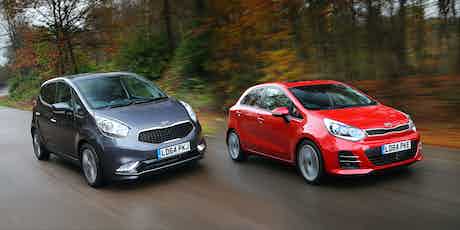 Kia is continuing its rise to become one of the mainstream choices in the car market.

Its new design-led philosophy – helped by chief designer and ex-Audi designer Peter Schreyer – has pushed its cars closer to the top of the class with each successive generation.

The updated Venga mini-MPV and Rio supermini have just been upgraded. As always, Kia’s devastatingly straightforward trim line up consists of grades 1 through 4 with a higher number indicating (perhaps unsurprisingly) higher standard specification.

The Venga was the first car Kia released under the supervision of Schreyer and is now due a mid-life facelift. Most prominent is the new grille – inspired by a tiger’s nose (no, we’re not making this up) – which has been re-profiled for a more upmarket look. Beneath it, the air intakes have been redesigned and running lights are now standard (LED from grades 3 and up).

At the rear, a chrome strip links the taillights for a classier look while said lights can be had in full-LED guise if you go for top-spec 4 guise. There are new 16-inch alloys on grades 2 and above and a choice of two new metallic paint colours – Planet Blue and Dark Gunmetal.

On the inside, entry-level cars now get houndstooth cloth upholstery while grades 3 and above get part-leather seats. A new grey metal grain-effect for the centre console fascia on grades 1 and 2 while 3 and 4 get a high-gloss black finish.

Tyre pressure monitoring is now standard across the range while grades 3 and 4 get automatic lights with the latter offering a follow-me-home function, staying on for a while after you’ve switched off the ignition. Top-spec 4 models also get a heated steering wheel and seats, a panoramic sunroof, seven-inch infotainment screen with sat-nav and a reversing camera. The stereo no longer offers a CD drive but has MP3, AUX and USB inputs to connect your music players to the car.

As before, a choice of 1.4 and 1.6-litre engines in petrol and diesel guises are available with power outputs ranging from 89hp to 123hp. None will light your pants on fire but neither will any give you palpitations at the pumps. A four-speed automatic is offered and might be preferable to the noisy CVT autos in the Toyota Yaris and Mitsubishi Mirage.

Like the Venga, the Rio supermini has had its front and rear ends restyled for 2015. The front air intake has been redesigned along with the front fog light housings that now feature extra chrome detailing. At the back, new reflectors and number plate housings complete the restyle – making the Rio look more purposeful.

Inside, new gloss black details feature on the central console and a chromed handbrake button takes pride of place. Premium black cloth now features on grades 2 and 3, while top-spec grade 4 gets part-leather seats.

A seven-inch infotainment screen is standard on grades 3 and 4 and offers sat-nav functionality and displays the output from the reversing camera. As with the Venga, a CD player is no longer offered but replaced by USB and AUX inputs for your portable music device. DAB radio and tyre pressure monitoring are now standard across the range.

Engines remain unchanged, so 2015 buyers will get a choice of 1.1 and 1.4-litre diesels and 1.35 of 1.4-litre petrol engines ranging from 74hp to 107hp. The 1.1-litre diesel emits just 86g/km of CO2 while returning a claimed 88.3mpg at the pumps. Stop/start tech helps keep idling costs down and an automatic gearbox is available as an option.

Kia has ‘democratised’ the safety for the Rio with all cars getting the same safety kit. That means stability control joins anti-lock brakes with electronic brake force distribution to keep you safe on the road. Emergency stop signalling flashes the rear-central brake light when the driver performs an emergency stop to warn drivers behind.

Both the Rio and the Venga feature Kia’s market-leading seven-year 100,000-mile warranty so will be reassuringly sensible purchases in the long run.

Why not take a look at our in-depth reviews of the Rio and Venga or visit our car configurator to specify one yourself. Alternatively, take a look at their rivals – the Nissan Note and the Ford Fiesta.