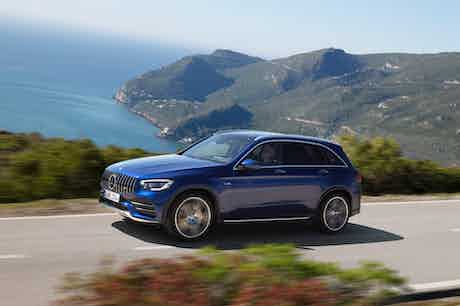 Mercedes is revamping its performance-oriented, mid-sized SUV. Here’s everything you need to know about the GLC 43 – and its coupe sibling.

The GLC 43’s styling mixes the chunky proportions of an SUV with the harsh-looking details that are a signature of Mercedes’ performance-oriented AMG range. The car may not have the full-blown aggression of the top-of-the-range GLC 63 but, at the front, there are many sporty standouts, including the snarling grille. It’s even adorned with twelve chrome vertical slats, which are quickly becoming an AMG trademark. Below it, the two air intakes may look impressive and large, but, upon closer inspection, they’re clearly as fake as that rumour you heard about Marilyn Manson’s ribs when you were in secondary school. Beneath them is a chrome front bumper that looks identical to the one found on the new Mercedes GLB.

Around the side, flared, black wheel arches are another clue to the GLC 43’s sporty status. The wheels are 19-inch alloys and, between them, a chrome step underlines the doors, which have silver window trims and, above that, roof rails.

Lastly, the back end flaunts four chrome exhaust pipes, which flank a set of black, drag-reducing fins. The redesigned rear lights – like the front ones – have LEDs as standard.

The GLC 43 also has a 4Matic all-wheel-drive system. Drive goes to all four of the wheels, but there’s a natural bias in the system under normal driving conditions towards the rear wheels that gives you the feeling of being pushed out of corners when you accelerate.

The GLC 43 has five drive modes: Slippery, Comfort, Sport, Sport+ and Individual. These let you modify aspects like the responsiveness of the engine, the tightness of the steering and the softness of the suspension, depending on whether you want to calmly cruise or get a bit more ferocious on a race track.

The GLC 43 comes with AMG Ride Control+ air suspension as well. This gives the car adaptive dampers, which, at high speeds, automatically reduces its ground clearance, cutting down wind resistance and increasing stability.

Furthermore, AMG Ride Control+ can adjust the suspension automatically, based on your driving style and the road you’re on, with three different modes available. These range from smooth and comfortable to firm and sporty.

The GLC 43 has speed-sensitive power steering. This, basically, makes it feels tighter and more responsive the faster you go.

Inside the GLC 43, you’ll find front sports seats included as standard, partially upholstered in Artico leather. Some racecar-like choices can be seen in the red stitching and seatbelts. The steering wheel has a sporty look too, thanks to its flattened bottom and perforated leather. The dashboard has some aluminium detailing, while the centre console has a carbon-fibre-effect aesthetic.

The GLC 43 makes use of Mercedes’ MBUX infotainment system, giving you a 10.3-inch touchscreen on the dashboard. You can operate it with voice commands, too. As seen in other models, such as the Mercedes A-Class, the party piece of the MBUX setup is its Augmented Reality navigation. This projects directional graphics over a live feed of the road in front of you, filmed by a front-mounted camera.

The Coupe has the same engine, chassis and equipment list as the regular GLC 43. However, it has a different look than the SUV, with a sweeping roofline that makes its profile look rather like a CLA 45 on stilts. Unfortunately, this means that rear passengers can likely expect slightly less headroom than in the standard GLC 43.

Stay up to date on the Mercedes-AMG GLC 43 by bookmarking this page.