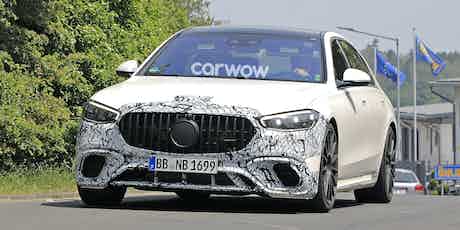 The new range-topping Mercedes-AMG S-Class has been spotted testing ahead of it hitting roads in 2022. This V8 sporty limo is expected to come with a new hybrid engine expected to produce up to 816hp. Read on for more.

The high-performance AMG version of the latest Mercedes-Benz S-Class has been spied before the car is officially revealed in 2021. It will be an alternative to the likes of the Bentley Flying Spur and BMW M8 Gran Coupe when it goes on sale and – thanks to a new petrol-electric hybrid engine in S73e models – a very fast luxury limo indeed.

The new Mercedes AMG S63e and S73e is set to get plenty of significant upgrades over the old S63. While the brash 4.0-litre twin-turbo V8 will return, it’ll be linked up to a punchy electric motor this time around.

Since the old S63’s V8 could produce 612hp on its own, you can expect this hybrid version to have a shedload more power. No details have been confirmed yet, but Mercedes could fit future S63e models with a revamped 4.0-litre V8 and the 129hp electric motor from the C-Class plug-in hybrid to produce more than 700hp.

If that still isn’t enough performance for you, an even more potent Mercedes S73e model is thought to be on the way. This car is expected to use the same hybrid-drive system as the upcoming AMG GT 73e 4-door, which will combine a 4.0-litre twin-turbo V8 with a 204hp motor with its own two-speed automatic gearbox.

In the new GT73e, this hybrid system produces 816hp and 1,000Nm of torque – which is enough to blast that car from 0-60mph in three seconds flat. Expect similar, if not identical numbers from the S73e.

While they’ll be quite different when it comes to power and performance, these new AMG S-Class models are set to be pretty similar in other areas. Both the S63e and S73e will come with a nine-speed automatic gearbox and they’ll only be available with all-wheel drive. You might still get a ‘Drift’ mode though, which will send all of the internal combustion engine’s power to the rear.

Because the AMG-tuned Mercedes S-Class will be a plug-in hybrid, it should have some electric-only driving abilities. Although, the compact 6kW battery fitted to the GT73e won’t be capable of matching the regular Mercedes S-Class plug-in’s 62-mile range.

Thanks to the limited camouflage on the prototype in these pictures, you can get a pretty clear idea of what the Mercedes AMG S-Class will look like. The standard car’s big shiny chrome fascia has been swapped out for a dark, slatted grille design seen on other Mercedes-AMG cars, and the front is made even more imposing by new air intakes in the front bumper.

In comparison with the front, the rest of the S-Class’ shape hasn’t been changed as drastically during its conversion into an AMG model. There are a few sporty details on show, however, such as the more prominent side skirts and the four exhausts poking out of the rear bumper.

The new Mercedes AMG S63e and S73e’s interior hasn’t been spotted yet, though expect a similarly thorough makeover inside. The core dashboard and interior layout will remain pretty similar for the most part, though the digital displays should get AMG-specific graphics, there’ll be a redesigned steering wheel and a pair of more aggressively bolstered front seats.

Speaking of the interior, the Mercedes AMG S-Class will boast pretty much all of the cutting-edge tech of the standard car – namely the huge touchscreen system that dominates the car’s centre console. A smattering of additional gadgets, such as a punchy stereo, massage seats and an augmented reality sat-nav system, will likely be available, too.

The Mercedes S63e and S73 are expected to come with tweaked versions of the standard S-Class’s adaptive suspension and four-wheel steering (the latter helping to improve stability when cornering at higher speeds.) Composite carbon-ceramic brakes should give the AMG cars even more stopping power than the regular S-Class, too.

The regular Mercedes S-Class is a few thousand pounds more costly than the car it replaces, so there should be similar price increases for the AMG models. Expect the Mercedes AMG S63e to cost from somewhere in the £130,000 ballpark, and the even faster S73e will likely be closer to £190,000. Mercedes hasn’t suggested a reveal date yet, though it’s likely the covers will come off the AMG S-Class in late 2021.

Can’t wait for this new car to go on sale? Check out the latest Mercedes S-Class deals available through carwow or compare the top 10 best luxury cars on sale now.