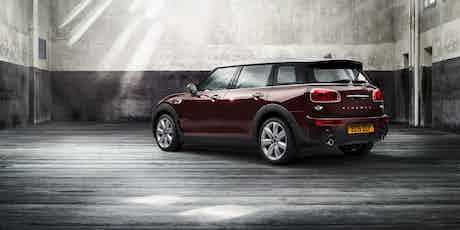 Mini has taken the wraps off its latest model – the Clubman. This compact estate aims to offer the fun and quality promised by Mini ownership without the usual sacrifice in practicality. Here are the five things buyers need to know…

The most doors ever fitted to a Mini

The Clubman has a total of six doors! The previous model had two passenger doors on one side and only one on the other but this latest model has righted the symmetry. Both sides benefit from a front and rear passenger door, and the trademark split-opening boot remains. This means entry into the cabin is a much easier proposition and, with the extended wheelbase, passengers will find it much less cramped than even the 5-door Mini. The boot doors can open electrically (by waving your foot under the rear bumper) if you spec the Comfort Access pack.

The most gears ever fitted to a Mini

A six-speed manual and automatic are available for the least powerful petrol engine – a 1.5-litre three-cylinder turbo with 136hp – but the larger diesel and petrol units get the option of a new eight-speed automatic. The latter also comes with steering wheel paddles for enthusiastic driving. More gears has benefits across the board, from improving acceleration via an increased selection of ratios to increasing fuel efficiency by lowering engine speeds at a cruise. Mini also reckons that the greater number of less intense gearchanges offered by this system enhances ride comfort.

Unlike the regular hatch and 5-door that get a 116hp 1.5-litre three-cylinder diesel, the Cooper D Clubman gets a 2.0-litre 150hp four-cylinder borrowed from BMW. The larger unit is less economical – the Clubman’s 68.9mpg is eclipsed by the hatch’s 80.7mpg – but, with its extra grunt, it’s 0.6 seconds faster from 0-62mph, completing the job in 8.6 seconds. The larger diesel is fitted mainly for the extra torque it offers, with 243lb ft it’s ideal for anyone looking to do some light towing or who regularly carries lots of passengers and luggage.

The Clubman’s central console – a first for any Mini – provides a place for storage and to mount the armrest. The rotary controller for the infotainment system is also housed here. The console reveals another first for a Mini – the lack of manual handbrake. The electric parking brake may take a little bit of getting used to, but does make it easier to set off on steep hills.

Standard spec includes goodies such as sat-nav, Bluetooth, and an LED ring around the infotainment system (which looks cooler than it sounds). Buyers can get the basic Cooper for £19,995, the Cooper D from £22,265 and the Cooper S from £22,755. British buyers can expect to get one on their driveways in Autumn if they order now.