Five reasons to get excited about the 2015 (not-Citroen) DS5 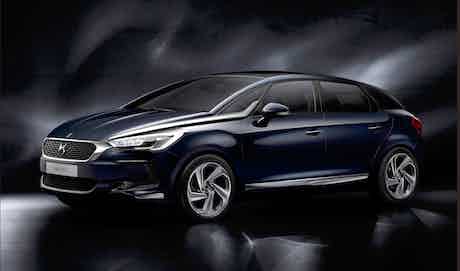 Citroen has unveiled a revised version of the DS5 premium family car. With changes to the styling and a major restructuring of the whole DS brand, we’ve had a look at the five most significant points of this stylish French hatchback.

The first thing you’ll notice when looking at the revised nose, is that Citroen’s trademark chevron grille is no more, replaced with the DS moniker. That’s because Citroen has broken off the DS models to become their own distinct brand – even Citroen’s press office now has a distinct department for DS dealings. The flagship DS5 is the first model to fully break away from Citroen, with the rest to follow soon. This move is seen as very important in China, where DS will be marketed as a premium brand to take on German rivals like Audi and BMW.

Beyond the new DS badges, the DS5 has undergone a series of styling updates. The most notable changes are at the front, where a new grille design is surrounded by a chrome border. This extends to the inside edges of new, sharper headlamps, with a “jewel like” structure, combining a mix of Xenon and LED lighting technology. As with the current model, a distinctive metallic strip runs along the edge of the bonnet, ending just ahead of the door mirrors. The sides remain largely unchanged from before, while the rear receives new tail light graphics and a tweaked bumper.

3. The driver’s seat will be among the best in the business

Citroen say the design is very much inspired by the aerospace industry. We’re not sure how obvious that’ll be to most buyers, but the current DS5 is certainly a very nice place to sit, and built to a wonderful standard which completely defies the old-hat French car stereotype.

A sweeping dashboard faces the driver to offer a “cockpit style” driving position, while a range of toggle switches are set into the centre console. A head-up display shows speed and sat-nav instructions, letting the driver remain focused on the road.

4. The same range of engines as before

The engines are carried over from the old model, meaning that a range of six petrol and diesel units are available. A diesel/electric Hybrid promises fuel economy of 80mpg while offering the security of all-wheel drive. The best value model is the base 120hp diesel, returning a claimed 74.3mpg and CO2 emissions of just 100g/km.

Later in the year, DS will introduce a 210hp petrol powered model matched to a six-speed manual gearbox to sit at the performance end of the range – but it’s likely to be thirsty for a car that’s designed for motorway cruising.

Until then, we can take a proper look when the model is unveiled to the public at the Geneva Motor Show on 3 March 2015. Prices are yet to be confirmed, though Citroen officials have suggested that they will raise slightly from the current starting point of £23,260.