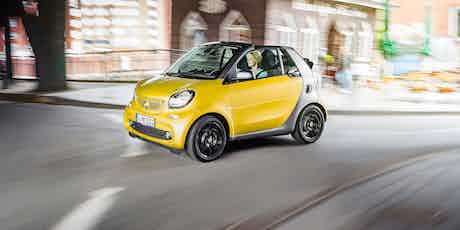 An all-new Smart Fortwo Cabrio will be shown at the Frankfurt motor show in September. The latest two-seat drop-top city car features a clever new roof design and a wide range of customisation options.

The fully automatic fabric roof can either be rolled back like a large sunroof, or completely folded away – an operation which takes 12 seconds and can be done while driving at any speed. Two roof bars can be removed (and stowed in a special compartment in the boot) for a full top-down experience. The fabric roof itself is available in one of three colours – red, black, or blue denim.

Removing the roof usually has an adverse effect on a car’s structural rigidity, which is why Smart has added extra bracing to the chassis over the coupe. As a result, torsional strength is 15 per cent higher than its predecessor. Smart’s parent group Mercedes even crash tested the car by dropping it on its roof.

The same Renault Twingo-derived engines feature. Both are three-cylinder units – a 1.0-litre with 71hp and a turbo 0.9-litre unit offers up 90hp. It’s possible to get around 67.3mpg from the latter, when driving very carefully. At just 2.69 metres long, and with a tiny turning circle of 6.95 metres, the Fortwo Cabrio will be an ideal car for city driving.

The cabin remains unchanged from the standard car, so expect to find bright colours and high quality materials. A device pairing system allows the connecting of smartphones for playing music and access to apps.

Smart hasn’t revealed full details about the Fortwo’s prices or its release date, but it’s likely to be priced marginally higher than the current Fortwo.

Read our full, aggregated review of the Smart Fortwo to see what the UK’s motoring press makes of it.