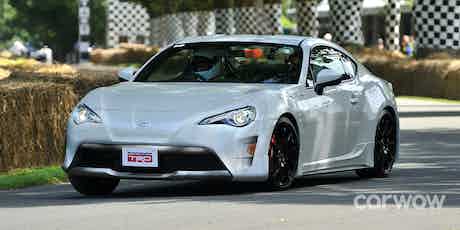 We caught sight of the 2017 Toyota GT86 in the north west of England, apparently returning from gruelling testing sessions in Scotland and Wales. As you can see from our photos, swirly camouflage hides revisions to the car’s nose, but we can still make out a few changes set to make it into production on the facelifted model.

A much wider front grille now features that helps to increase the car’s visual width and should provide extra cooling for the engine. The headlights look very similar, but may well hide new LEDs to give a unique light signature.

After hours scouring the photos, pixel master Nick Lette van Oostvoorne has put together a rendered image (above) showing what the updated GT86 could look like.

The rear bumper has been partially reshaped and now houses even larger exhaust tips along with refreshed brake light clusters. A spoiler sits atop the boot lid to lend the car some sporting credentials, too.

The engine and drivetrain should remain unchanged, so you’ll still get a 2.0-litre four-cylinder ‘boxer’ engine and a six-speed manual gearbox. The 197hp output should, likewise, be the same along with the 7.6-second 0.62mph dash and 140mph top speed.

Prices are not expected to change so the basic £22,700 model should remain. Before the facelifted model is released in 2017, Toyota dealers will offer discounts on the outgoing model so put the Toyota GT86 in our car configurator to see how much carwow could help you save.