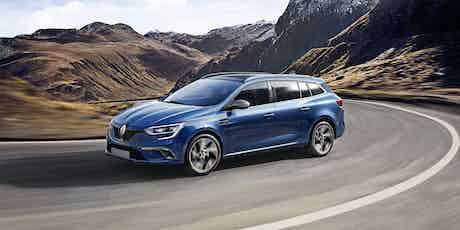 Renault is looking to expand its upcoming Megane range with the new Sport Tourer estate. Starting where the attractive hatchback left off, the Sport Tourer keeps the handsome styling but adds a handy estate boot to the mix.

Practicality is an important facet of the Sport Tourer’s character so we expect to see an increase on the hatchback’s 384-litre load bay. The hatch narrowly edges the Volkswagen Golf on boot space so an area slightly bigger than 600 litres is likely.

Considering it’s an estate version of the Megane, the new Sport Tourer holds few surprises on the styling front. In fact, nothing about the car’s front end is changed – you get the same bold Renault badge set into the grille flanked by frowning headlights. Those light units also feature instantly identifiable C-shaped elements giving the car a unique character.

The neat sculpting down the car’s sides remain but its rear haunch is extended compared to the hatch to accommodate the slightly longer load bay. Equally, the D pillar – the panel connecting the rear of the roof to the body – has a blacked out section and a chrome strip running up it giving the illusion of a ‘floating’ roofline. The slim taillights are mostly unchanged and both point to the central Renault badge.

Like the exterior, the interior isn’t expected to change compared to the Megane hatchback. The same portrait-oriented infotainment screen occupies the centre of the dashboard and, while it’s a touchscreen, the on screen buttons appear obvious – hopefully making it easier to use than other fiddly touchscreens.

A digital display makes up the instrument cluster and will probably be configurable by the driver to show the information they need at that moment in time including engine speed, road speed or sat-nav instructions. An optional head up display looks to be an option helping drivers keep their eyes on the road while showing them vital information.

The brand claims the interior is ‘modular’ allowing a variety of layouts to maximise boot space. This will probably translate to rear seats that can be slid backwards for more legroom or forwards for more cargo space. In addition, with the seats folded, Renault claims the car has the longest load length in the segment.

Again, buyers familiar with the new Megane hatch won’t find any surprises under the bonnet. A 1.6-litre turbodiesel with around 130hp will be offered but, for buyers with one eye on efficiency, a smaller 1.5-litre unit might be the pick of the range. This compact engine makes around 110hp but responds so well to throttle inputs, it feels stronger than the 1.6 in everyday driving.

Petrol fans will get a 1.6-litre turbocharged unit with around 200hp at the top of the range but most buyers will be better suited to the 1.2-litre turbo with around 100hp. A choice of six-speed manual or six-speed twin-clutch automatic gearboxes will be offered across the engine range.

It’ll offer a broadly similar driving experience to the hatchback so expect a balance between rice comfort and sporty handling that leans marginally towards the latter. Like the hatch, it’ll be offered with optional four-wheel steering – a system that slightly steers the rear wheels to make it more agile at lower speeds and more stable at higher ones.

A range of trims will be offered from launch but the specific names haven’t been confirmed. It’s likely that Expression will be the entry-level trim with only basic extras and Dynamique will offer more desirable additions – mirroring the Clio’s trim range.

Top spec models are expected to be called the GT and will get the four-wheel-steering system and most powerful engines as standard. It’s not clear if Renault will offer a full-bore Sport Tourer Renaultsport model yet – it hasn’t previously but with rivals including the VW Golf R Estate and SEAT Leon ST Cupra, it might reconsider for this model.

Prices will track those on the hatchback with a small increase for the extra versatility. This means entry-level cars could cost around £15,000 and top-spec versions hovering around £27,000.

The car will be officially revealed at the 2016 Geneva Motor Show with first deliveries expected later in 2016.