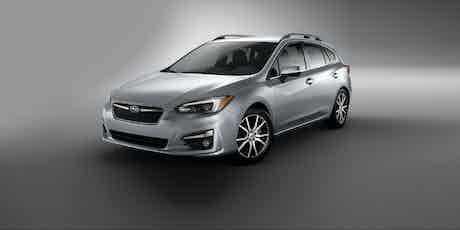 The new Subaru Impreza has been revealed in New York – it’ll go on sale in 2017, with updated styling, technology and improved handling

The new Subaru Impreza has been unveiled at the 2016 New York Motor Show. It’s set to replace the current Impreza, which has been in production since 2011. The new Impreza was shown-off in saloon and hatchback forms, although only the latter will be on sale in the UK.

It’s expected to cost from £18,000 when it arrives on our shores in 2017. If you can’t wait that long, take a look at the deals carwow can get you on the outgoing Impreza.

From the side, a crease runs across the bodywork, emphasising the flared wheel arches and reducing visual weight.

It’s a couple of centimetres longer and wider than the outgoing model, but more streamlined to improve fuel consumption.

A updated interior has been designed to echo the sharp exterior styling. It features a contoured, leather dashboard with metal and carbon-look inserts.

A new touchscreen and voice-controlled infotainment system incorporates sat-nav and a reversing camera. It can also be linked to your smartphone too, allowing music streaming and and live traffic updates.

The new Impreza has an automatic braking system that detects imminent collisions and automatically brings the car to a stop, should the driver fail to use the brakes.

No details on engine options have been given, but the new Impreza could offer the 1.6-litre petrol from the outgoing model, or the 2.0-litre petrol and diesels that come in the Subaru XV.

It’s likely Subaru will launch more powerful WRX and WRX STI versions later in the Impreza’s life. These models will probably continue to be powered by the same 2.0 and 2.5-litre flat-four-cylinder turbocharged engines that feature on outgoing models.

We’re yet to drive the new Impreza, but we know it’ll come with Subaru’s four-wheel-drive system that should give excellent traction and grip in all conditions.

The body is said to be 70 per cent stiffer than the last Impreza, which should improve both handling and comfort. Furthermore, a new suspension design aims to reduce body roll in corners, giving better road-holding.

Based on the price of the current Subaru Impreza, we expect the new model to cost around £18,000. If a rally-derived ‘WRX STI’ version is made, it could push the price up to £30,000 and beyond, however.

Subaru is remaining tight-lipped on the exact release date of the new Impreza, but the car should be available to buy in 2017.

Save money on your Subaru Impreza

Get great deals on the current Subaru Impreza, use our car configurator. Or, if you still don’t know what you’re looking, check out the carwow car chooser.