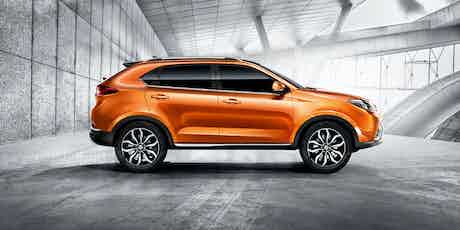 MG has confirmed the new GS SUV will go on sale in 2016 following its unveiling at the London Motor Show in May. Here’s what we know so far…

The MG GS SUV has been conformed for sale later in 2016. The GS was first revealed at the 2014 Shanghai Motor Show but will make its first official UK appearance at the 2016 London Motor Show.

If you’re after a cheap SUV but can’t wait for the MG GS, have a look at our 10 cheapest SUVs and crossovers article. See how much you can save on any current cars in the MG range using our MG car configurator.

The hexagonal rear lights look similar to the MG 6 but appear to suit a large SUV body shape slightly better. The black plastic insert that blends into the rear window might give the impression of a large glass area but rear visibility could be slightly compromised by its tall tail.

The new GS’ interior – shown above courtesy of carscoops.com – will aim to be an improvement over the MG 6’s cheap feeling cockpit. Glossy black panels will dominate the dashboard giving the interior a fairly modern flavour, but a large number of buttons on the centre console could look, to some buyers, a little old-fashioned.

No official details have been announced but we expect the standard GS to be as well-equipped as other MG models. A new dashboard and steering wheel will be joined by a centrally mounted infotainment system with a six-inch screen as standard and eight-inch one on high-spec models.

The new GS will reportedly be offered with 1.5 and 2.0-litre turbocharged petrol engines and a six-speed manual gearbox. Drivers after super-smooth gear changes can choose an optional dual-clutch automatic unit.

MG hasn’t confirmed final prices for the new GS but we expect entry-level models to cost less than £15,000. This position in the hotly contested SUV and crossover market will force it to compete with rivals such as the Renault Captur and Fiat 500X. The GS will make an appearance at the 2016 London Motor Show in May and go on sale soon afterwards.

If you can’t wait for the launch of the MG GS, read our list of the top 10 small SUVs and crossovers currently on sale. Our MG car configurator can help you get a great deal on any cars in the current range and, if you’re not sure what to buy, our car chooser tool is here to help.