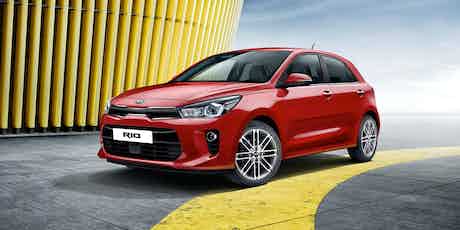 Kia has pulled the wraps off the new Rio ahead of an official debut at the 2016 Paris Motor Show in October. Read on for details…

Kia has released official photos of its new Rio before it makes a public appearance at the 2016 Paris Motor Show in October. Initial reports suggest the new car will be both longer and wider than the outgoing model and could, as a result, offer improved cabin space and a more capacious boot.

Kia hopes this well-built supermini will bring the fight to rivals such as the Hyundai i20 and Ford Fiesta. Indeed, if it boasts a similarly comfortable ride, cheap running costs and spacious cabin as the outgoing model, it could prove to be a tempting prospect. Read on for full details…

Kia has lowered the new car’s roof to help give it a sportier stance and lengthened its wheelbase by a subtle 10mm. The most apparent changes, however, are the revised front grille, broad new headlights and a pair of daytime running lights nestled inside two black trim pieces.

The new Rio’s less curvaceous rear sports a pair of updated brake light that appear to feature LED technology. The bumper is fitted with a modified black panel at its lowermost edge and the previous car’s L-shaped reflectors have been lost in favour of two slimmer items mounted beside the number plate. In addition to these subtle changes, the new car looks noticeably stockier than before and features a strong new crease running across its doors.

The interior has been treated to a comprehensive refresh, too. Not only is a new selection of materials and trims on offer but an all-new infotainment system sits in pride of place on the more deeply sculpted dashboard.

The new Rio is expected to cost approximately the same as the outgoing model – entry-level versions could cost less than £11,000 while top-spec cars could set you back close to £17,500. Kia has hinted that production of European cars will start before 2017.