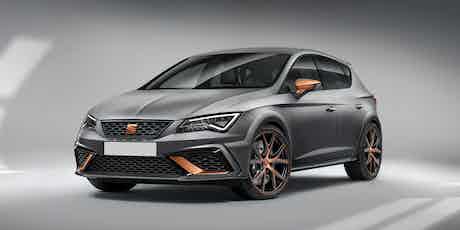 SEAT’s high performance Leon Cupra R will feature more than 300hp. How will this mega-hatch fair against rivals?

When we tested the SEAT Leon Cupra, we were blown away by its combination of performance, quality and practicality. If that model’s still not excessive enough for you, however, SEAT has unveiled an even hotter Cupra R version. This car is thought to feature a power hike under the bonnet and a few choice mechanical upgrades.

Images are courtesy of Autoevolution give us our best idea yet of what the new model could look like.

Previous high-performance Cupra models featured unique grilles and Cupra badging all around. It’s safe to assume the Cupra R will set itself apart from your standard diesel Leon by featuring aggressive styling touches and badges.

The Cupra R should be equipped with lots of practical kit as standard and sporty touches all round. It could boast new seats with Alcantara trim, carbon fibre trim pieces and Cupra R badging to set the interior apart from lesser Leon models.

With the Leon Cupra 300 boasting 295hp from a 2.0-litre petrol engine, expect the Cupra R to add an additional 10 to 15hp over this model. SEAT will probably rework the selectable suspension settings found in Cupra models, possibly adding a harsher race mode.

There’s no news yet about the official release date but rumours suggest we could see the Cupra R go on sale later in 2017. It’ll probably be priced from around £34,000 – a few thousand pounds more than the current Cupra and a small premium over the Leon SC Cupra 280 Sub 8.