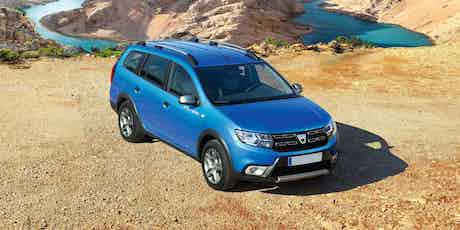 Dacia’s impressively practical Logan MCV will soon be available with eye-catching black cladding in rugged Stepway guise. This more outdoorsy version of the brand’s affordable yet practical estate will also be offered in new limited edition SE Summit trim when it goes on sale in 2017.

The new Logan MCV Stepway has been raised by 50mm over the standard car and features resilient black plastic wheel arches to protect its paintwork should you ever take it off-road. Its bumpers have been redesigned, too, and now come fitted with LED daytime running lights and a silver plastic skid plate.

Thankfully, the Stepway model boasts just as practical a boot as the standard Logan MCV. Its 573-litre capacity makes it by far the largest in its class and runs some much more upmarket rivals close in terms of outright practicality.

The Stepway model’s cabin does benefit from a few subtle touches to help it stand out from the standard car. The door handles and air vents feature a new satin-like trim while Dacia’s added what it calls 3D stitching to the fabric seats to liven up the Logan’s rather drab interior. The steering wheel has also been re-modelled with new buttons to make operating items such as the stereo easier, too.

The new Logan MCV Stepway will go on sale in 2017 but Dacia hasn’t confirmed how much it’ll cost. The Sandero Stepway carries a nearly £3,000 premium over the standard car so, as a result, we expect the new Logan MCV Stepway to cost from around £10,000. Limited edition SE Summit models, with upgraded sat-nav system and cruise control as standard, could cost closer to £14,000, however.