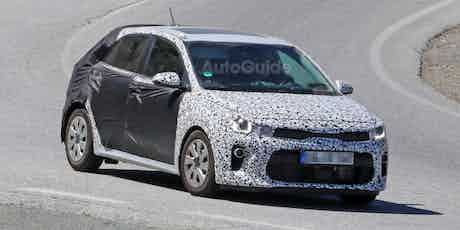 A sporty ‘GT’ version of the Kia Rio has been spied testing. This new model could go up against the likes of the VW Polo GTI and the Ford Fiesta ST when it makes its debut – currently thought to be around 2018. Images courtesy of Autoguide give us our first glimpse of what this car could look like.

We expect the Rio GT to borrow some styling cues from its Kia Pro Ceed sibling. Lower LED daytime running lights in place of small foglights flanking the bumper could be found up front, as well as a more aggressively styled grille and angular bumper.

The car could also feature sportier side skirts, a roof in contrasting colours and sporty wheels. At the back we could see a small spoiler, LED running lights and a large sporty bumper with one or two exhausts to denote this extra-sporty model.

The car’s interior highlights could include sporty seats – similar to those found in Pro Ceed models – trimmed with red stitching, a sportier-looking gear lever and a smaller, more bolstered steering wheel.

GT models could come equipped as standard with all the features found on the top ‘3’ trim such as heated seats and steering wheel along with an infotainment system with sat nav, Apple Carplay and Android Auto.

We suspect Kia will use the 1.6-litre turbocharged petrol engine found Kia Ceed GT model, which puts out a healthy 201hp. In the Ceed GT, it’s capable of sprinting from 0-62mph in 7.7 seconds and tops out at 143mph. Considering the Rio weighs less than the larger Ceed, we expect even quicker acceleration times and possibly better mpg figures than the 38mpg-capable Pro Ceed.

Engines should be mated to either a six-speed manual gearbox or an optional seven-speed dual-clutch automatic. Keen drivers will likely opt for the standard manual to wring out all the car’s performance while the auto will better suited to all-round drivers or those spending many miles around towns.

A top-spec Rio is priced from £17,445, which includes an industry-leading seven-year warranty. We expect the Rio GT to demand at least a £2,000 premium over top-spec models and launch around 2018.

If you’re interested in other sporty Kias, check out our article on the upcoming Kia Stinger GT performance saloon.