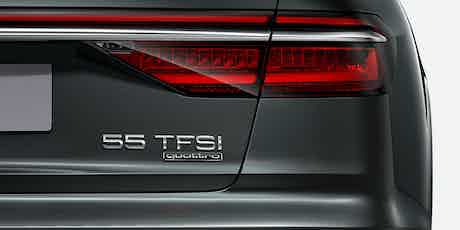 Audi has introduced new two-digit engine badges that show how much power each model produces. Use our guide to make sense of the changes

Audi has launched a new engine badging system that’s left a few fans scratching their heads. Engine badges typically show the engine’s size or power, but Audi has ditched this in favour of a two-digit structure to denote the amount of power the car produces.

The numbers don’t seem to relate to the car’s actual horsepower figure, so use our table below to make sense of it all. It’ll be phased in with the introduction of the new Audi A8 and cover the entire range by summer 2018. Sporty S versions and high performance RS models are not affected by these changes.

What are Audi’s new badges?

Confusingly, there are gaps between horsepower categories that mean some of Audi’s current range doesn’t appear to fit into any of these groups. For example, a 3.0-litre A6 BiTDI produces 320hp – not enough to earn a ’55’ badge, but too much for a ’50’. Likewise, the entire Q7 range doesn’t seem to fit in.

Why is Audi changing its badges?

Audi says the new badges will help make more sense of its range as it introduces more hybrid and electric cars – their figures don’t always compare clearly to traditionally fuelled cars. Equally, more advanced engine tech and the fact many modern engines are turbocharged means an engine’s physical size isn’t as relevant as it used to be – many manufacturers offer the same-sized engine in different power outputs depending on the level of performance you want.

What does this mean for customers?

In reality, nothing – Audi isn’t changing the engines it uses, just the badges it fits. If you’re still not a fan of the idea, Audi offers the option to delete any badging when you place your order.

Click login in the top-right-hand corner to sign up and configure a new car, or browse our extensive range of new, nearly new and pre-reg stock cars. For more options, head over to our car chooser or check out our latest new car deals.