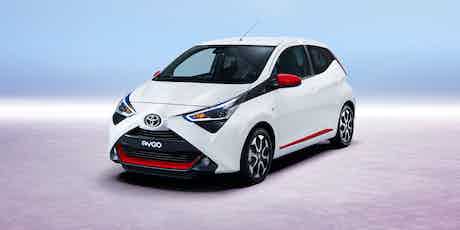 Toyota’s released photos of the new Aygo that’ll take on the likes of the VW Up. Full details on this refreshed supermini here…

Toyota’s given the compact Aygo city car a mid-life facelift to help it keep pace with the likes of recently revised VW Up and all-new Suzuki Swift. This eye-catching small family car will come with a slightly more powerful engine when it goes on sale in mid-2018.

Before this new model hits showrooms, see how much you can save on the current Aygo by heading over to our deals pages. Click ‘login’ in the top-right-hand corner to sign in and configure a brand-new car, or browse our extensive range of pre-reg, ex-demo, new, nearly new and used in-stock cars.

The new Aygo gets a similar X-shaped front end as the old car but now the headlights, fog lights and grille blend together in a neater, less fiddly fashion. Its looks will probably divide opinion more than the likes of the VW Up and Suzuki Swift, but there’s no denying it’ll certainly stand out in the supermarket car park.

Changes at the rear are more subtle. The new car comes with upgraded LED brake lights but that’s all that separates it from the outgoing model. You will be able to get the updated Aygo with new alloy wheels designs and some in some new colours, however.

Inside, the Aygo’s infotainment system gets some new menu graphics and the seats can be had in a range of new upholstery colours, but everything else has been carried over unchanged from the outgoing car – shown above.

The old car’s 1.0-litre three-cylinder petrol engine has been given a slight upgrade – it now conforms to stricter emissions regulations as well as producing 2hp more than before. Probably more noticeable will be the extra sound insulation Toyota’s added that’ll help make the Aygo more relaxing to drive on motorways and for long periods.

Toyota hasn’t announced how much the new Aygo will cost when it goes on sale in mid-2018 but it’s expected to set you back approximately the same as the outgoing car. As a result, entry-level models cost around £9,500.