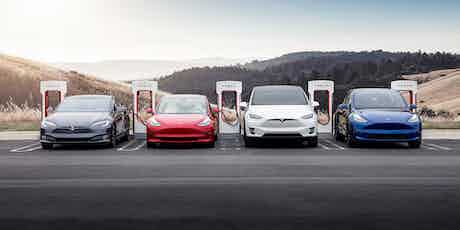 Taking to Twitter, Tesla founder Elon Musk revealed that Tesla’s Supercharger network will be accessible by electric cars made by other manufacturers ‘later this year’.

Tesla’s Supercharger network of rapid chargers will be accessible by electric cars produced by other manufacturers later in 2021.

That’s according to Tesla founder Elon Musk, taking to Twitter to confirm the plans.

We created our own connector, as there was no standard back then & Tesla was only maker of long range electric cars.

That said, we’re making our Supercharger network open to other EVs later this year.

In response to criticism of Tesla’s connectors, Musk said: “We created our own connector, as there was no standard back then & Tesla was only maker [sic] of long-range electric cars.

“It’s one fairly slim connector for both low & high power charging. That said, we’re making our Supercharger network open to other EVs later this year.”

Tesla’s current Superchargers typically offer two cables — a Type 2 and a CCS. In theory, this would allow any other electric vehicle supporting those connector types to hook up to the cable.

This would then allow them to access charging speeds of up to 250kW where supported.

Tesla had previously confirmed to officials in Norway that the Supercharger network would support non-Tesla cars by September 2022, though these plans look to have been moved forward.

He said: “I am in direct talks with carmakers such as Tesla to make sure the existing infrastructure, for example, Tesla’s Superchargers, will be open to other manufacturers”

No word yet from Tesla on how much it will cost owners of other electric cars to charge their EVs using the supercharger netweork.

Looking to make a Tesla your next car? Good news, you can now buy a Model 3 through carwow, tap here to find out more