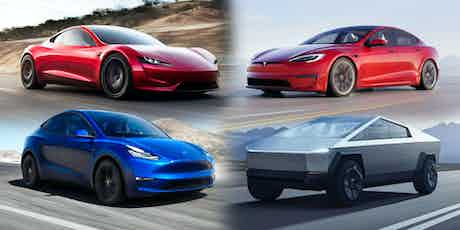 Elon Musk has suggested Tesla could stop taking orders for new cars, citing issues with supply and production. The Tesla CEO has already stated the firm doesn’t plan to launch any new models before 2023. Read on for full details.

Tesla CEO Elon Musk has suggested there was a possibility the electric-car maker could stop taking orders for new cars in around a year’s time if delays to the supply of parts and raw materials aren’t addressed.

This follows previous updates from the CEO that Tesla isn’t looking to launch any new models (including the eagerly anticipated Tesla hatchback) before 2023.

Speaking during the Financial Times ‘Future of the Car’ summit, Musk stated that he’s “confident we will be able to sell all the cars we can make” and that his focus was not on attracting new buyers, but on solving production and supply chain issues.

Most car makers are struggling with a shortage of parts resulting in a perfect storm of microchip shortages and, in some cases, difficulty in securing parts made in Ukraine in light of the ongoing Russian invasion.

The growing popularity of electric cars will increase demand for the raw materials used to make car batteries, potentially leading to further supply issues in the future.

Musk alluded to suspending orders for the current line-up of Tesla models during the FT summit. “We will probably stop taking orders for anything beyond a certain period of time. Some of the timing is around a year away”, he said.

Instead, future U.S.-spec Tesla Model S and Model X cars will use the company’s latest ‘Tesla Vision’ system – a series of cameras fitted around the car to give the onboard computer a 360-degree live video feed of the car’s surroundings.

This is in stark contrast to what other manufacturers are doing, namely developing self-driving car software using Radar and Lidar technology.

Both these systems use emit their own light (although invisible to the human eye) that bounces off a car’s surroundings and returns to specialised sensors fitted to the car’s exterior. The car’s onboard computer uses this information to build a detailed digital map of the car’s surroundings.

Tesla’s system relies on external light sources (such as the sun, other car headlights and street lights) in the same way the human eye does.

Tesla CEO, Elon Musk, said during the company’s first-quarter earnings call in 2021 that “There’s no question in my mind that with a pure vision solution, we can make a car that is dramatically safer than the average person”.

Tesla’s upcoming hatchback will cost less than a Model 3 (the firm’s current cheapest car) and is set to undercut the Volkswagen ID3 by costing as little as £18,000.

However, Elon Musk confirmed Tesla won’t launch any new models in 2022 during the firm’s 2021 financial roundup in January ’22. It’s reportedly still in the works, but you may have to wait until 2023 to order one.

Get all the info on Tesla’s new small EV

Click the green button to get all the details on this exciting new hatchback electric car.

The Tesla Cybertruck will also be delayed by Tesla’s decision not to launch any new models in 2022. This electric Pickup’s lineup is also set to include a new range-topping quad-motor version.

Get the latest Cybertruck info

This move is likely to help the ever-delayed Cybertruck stand out from the crowd of electric pickups that have appeared over the last few years, including the Ford F150 Lightning, the Rivian R1T, the Hummer EV and the Chevrolet Silverado EV.

If you thought the Tesla Roadster had escaped any further delays, get ready for another bit of disappointment.

Find out how to reserve a Tesla Roadster

Just like the upcoming hatchback and Cybertruck, it’s been put on the back burner until after 2022 as Tesla focuses on developing its Full Self Driving (FSD) tech and deals with the ongoing chip shortage.

Elon Musk has said he’ll be “shocked” if Tesla doesn’t produce a Full Self Driving (FSD) system update that makes its latest cars safer than human drivers by the end of 2022.

Tesla’s Full Self-Driving system (FSD), which up until now was a £6,800 option on its Model 3, S and X vehicles, will now be available as a monthly subscription.

While not technically able to drive the car autonomously 100% of the time, it does offer an advanced suite of driver aids from collision warnings and emergency braking assist to auto parking and lane changing. It even has a smart summon feature which allows the car to navigate to you in a parking lot.

With periodic over-the-air updates adding to the systems abilities, Tesla’s FSD tech is one of the most advanced systems of its kind. However, some owners may not yet be ready to part with a lump sum for a technology that is still in development and the monthly subscription option will be a far more viable choice for them.

Features such as automatic steering and stopping on city streets are planned for release in due course.

Pricing for the US market is $199 per month if you have basic autopilot fitted or $99 if you have the enhanced autopilot feature (which was offered on certain older models). UK pricing has yet to be announced but should be approximately £145 at current exchange rates. The subscription can be cancelled at any time.

You will need to have the FSD computer installed in your vehicle before you can take advantage of the subscription, this is a complimentary service if your car already has the autopilot computer 2.0 or 2.5.

A new ‘Track Mode’ has begun rolling out for the high-performance Tesla Model S Plaid.

This mode has been honed at the famous Nürburgring racetrack in Germany and is available as an over-the-air update for cars in North America.

It makes key changes to the behaviour of the car’s electric components to maximise its performance around a racetrack.

These include optimised battery cooling to prevent the pack from overheating. This allows for more consistent power use, as well as increased regenerative braking power to return more charge to the battery.

A new torque-vectoring program has been introduced as well. This allows the car to automatically adjust the levels of torque split across the rear axle, improving turn-in response and mid-corner grip.

The Model S Plaid’s stability control also sees tweaks in Track Mode to allow the driver ‘maximum’ control of the car’s movement. Essentially, this will let the car slip and slide about more (if you’re going for style points rather than outright lap times.)

The car’s adaptive suspension firms up to prevent the Model S from rolling side-to-side too, while the icing on the cake is a racier infotainment display in Track Mode. This will show lap time info, vehicle temperatures and g-readings (among other bits.)

That said, you may want to consider paying to upgrade the brakes to Tesla’s-own carbon ceramic kit for the best track performance. These will be available later in the year for $20,000 (about £14,700).