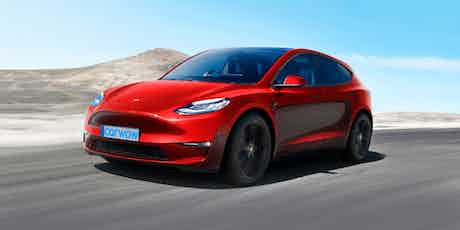 Elon Musk has ruled out the Model 2 name for an upcoming new hatchback from the EV specialists. Read on for all we know about the car.

A new Tesla hatchback is on the way, and will look to come in as an affordable alternative to the Volkswagen ID3. Great news – but there’s a problem…

Elon Musk revealed during Tesla’s first quarterly financial report of 2022 that Tesla is ‘not currently working on the $25k car’.  Instead, the pioneering car brand is supposedly focussing on developing its ‘Full Self Driving’ tech instead.

Since it launched the original Tesla Roadster in 2008, Tesla has released a pair of saloons, a seven-seater and a small SUV. There’s also an eye-popping Cybertruck pickup and an eye-watering Roadster hypercar on the way too.

During the 2020 Tesla Battery Day conference, Elon Musk confirmed its next car will be a hatchback, becoming the smallest and comfortably the cheapest Tesla yet. It should prove an ample alternative to the Volkswagen ID3.

But why is Tesla doing this? Well, it’s all to do with how much electric cars cost to build. When the first Tesla Roadster came out in 2008, components for electric cars were really expensive. That meant Tesla had to sell its cars for a lot of money in order to make a serious business case.

But since then, the cost of all these parts has dropped massively so Tesla can start selling smaller, cheaper electric cars without making a loss.

Take the Renault Zoe, for example. This electric supermini has 245 miles of range thanks to its 52kWh battery and costs less than £30,000.

The original Tesla Roadster had a 53kWh battery and 230 miles of range, but it cost more than £60,000. That’s a significant improvement in 13 years…

When it does arrive, this new Tesla hatchback is going to have a new kind of battery that’s more powerful, safer and cheaper thanks to its tabless design that uses a new kind of connector to join the individual cells together.

These are about 35% smaller than conventional batteries and can store and release more electrical energy with less risk of them overheating. Tesla says its new cars will have about 16% more range per kilowatt-hour of battery thanks to these new cells.

Even if this new car’s battery pack is half the capacity of the one in the Model 3 Standard Range Plus, its new ‘Tabless’ construction means it should manage at least 160 miles on a charge.

Tesla also plans to use the new car’s batteries as a structural part of the car’s construction. This will help make the car lighter and stronger because the batteries are doing some of the work to support the car’s underpinnings – not the other way round.

It’ll start selling new versions of the Model Y fitted with this type of battery in 2022.

Tesla says its new structural batteries will have 370 fewer parts each than a normal battery, so they’ll be quicker to produce and use fewer materials too.

They’ll also help make the new car 10% lighter than a conventional electric car, which could boost the new car’s range by another 14% from around 160 miles to more like 180 miles.

What does that mean for performance? Well, the lighter a car is, the quicker it can accelerate because its motor has less mass to move around. This new Tesla will probably only use one electric motor to keep its price down, but that doesn’t mean it’ll be slow.

The Model 3 Standard Range Plus only uses a single electric motor, but it’ll do 0-60mph in 5.3 seconds. That’s almost half a second quicker than a Honda Civic Type R. It’s possible that this new hatchback with its lighter chassis and new, high-tech batteries could be even quicker than that.

Like the Tesla Model 3, you’ll be able to get different versions of this new Tesla hatchback. Musk has already confirmed that entry-level models will cost about £18,000, but he’s also said there’ll be a fully autonomous version along at some point.

This’ll use an upgraded version of the ‘Full Self Driving’ tech that Tesla’s testing right now. This upgrade costs just under £7,000 at the moment, but the price could come down by the time this new car goes on sale.

Unfortunately, the development of this new hatchback will take a back seat as the firm focuses on getting its ground-breaking driver-assistance tech ready. As a result, it’s unlikely you’ll see this new car on the road before 2025.

Can’t wait for this new car to go on sale? Check out the latest Tesla Model 3 leasing deals or compare the Top 10 electric cars on sale now.