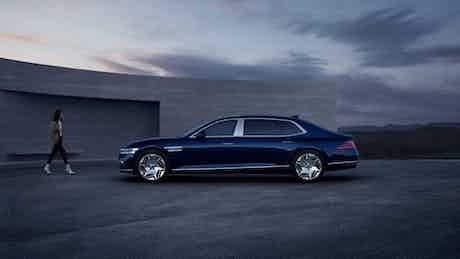 The new Genesis G90 has been revealed as a luxury saloon to offer buyers an alternative to the Mercedes S-Class and BMW 7 Series.

The Genesis G90 has been revealed as the company’s flagship luxury saloon. It will replace the current model that has been on sale in other countries since 2015.

Check out the best luxury cars

This striking-looking car will be a left-field alternative to the Mercedes S-Class and BMW 7 Series when it goes on sale, but sadly there aren’t currently any plans to bring it to the UK.

The Genesis G90 adopts the brand’s signature look that certainly stands out from the crowd.

Up front, the headlights are split into two thin LED strips which flank the huge crest grill you’ll spot on other Genesis models, such as the GV70 SUV.

The rear end is just as striking as the front. The taillights are slim LED units and there are two light bars that span the width of the car. There’s no apparent exhaust fakery here either, unlike on some German alternatives – Audi, we’re looking at you.

The overall design is clean and fuss-free, with a strong line down the side of the car that makes it look more muscular.

The interior looks just as impressive and elegant as the exterior. The materials all look high quality and there is plenty of metallic trim around the place.

The infotainment system and digital drivers display are both contained in one panel which is split up by a leather trim strip. The doors have some swanky-looking open-pore wood as well.

As you’d expect in a luxury saloon, the rear seats are just as luxurious as the front. Each seat can be reclined for maximum comfort, and there will be a long-wheelbase model for those who demand more legroom.

Only one engine has been announced for the Genesis G90, a 3.5-litre turbocharged petrol engine with 380hp. It will also be offered with either rear-wheel-drive or all-wheel-drive.

The G90 will be available with adaptive air suspension. This uses a camera to read the road and set up the suspension accordingly to help smooth out upcoming bumps and potholes.

No prices have been revealed for the new Genesis G90, but expect it to undercut cars such as the Mercedes S-Class. Somewhere around £70,000 is a safe bet.

Don’t reach for your wallet yet though, as there aren’t plans to bring the G90 to Europe at the moment.

Can’t wait for the new Genesis G90? Check out deals on the Mercedes S-Class through carwow. Alternatively, check out the carwow configurator to build your ideal luxury car and get offers back from our trusted dealers.