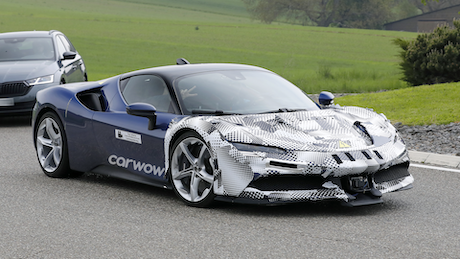 The new Ferrari SF90 Versione Speciale has been spotted testing, and you can expect to see it debut in 2023. Read on for all you need to know.

The new Ferrari SF90 Versione Speciale has been spotted testing ahead of a possible reveal in 2023.

This alternative to the Lamborghini Aventador and McLaren 720S is likely to get tweaked styling and a bit more power.

This new version of the Ferrari SF90 is only wearing light camouflage, suggesting it’ll only be getting some slight changes over the current car.

At the front, it looks like it’ll get a tweaked air intake in the bonnet, similar to that found on the Ferrari 488 Pista. Changes beyond this seem to be subtle, however a refreshed bumper is likely.

The rear is completely uncovered on this prototype, and it shows no changes over the current SF90. The aggressive rear diffuser is set to stay, and the overall profile is still low-slung and sporty.

No details have surfaced yet relating to engine changes, however it will still retain the plug-in hybrid setup in the current car.

That means a 4.0-litre twin-turbocharged V8, paired with three electric motors. Power in the current car stands at 1,000hp and 800Nm of torque, however you can expect to see an increase for the Verisone Speciale.

There aren’t any photos of the new Ferrari SF90 Versione Speciale’s interior, however don’t expect too many changes.

The current car has a very driver-focussed cabin with plenty of posh materials. The new Versione Speciale may get some new trim options, as well as new interior colours.

You can expect the new Ferrari SF90 Versione Speciale to debut in 2023. The SF90 was first released in 2018, and Ferrari usually updates their cars after five years.

Looking for an easy way to change your car? Then head over to carwow. You can sell your car for a great price, as well as get the the best deals on a new car. All this through a network of trusted dealers and all from the comfort of your sofa. Tap the button below to get started today.