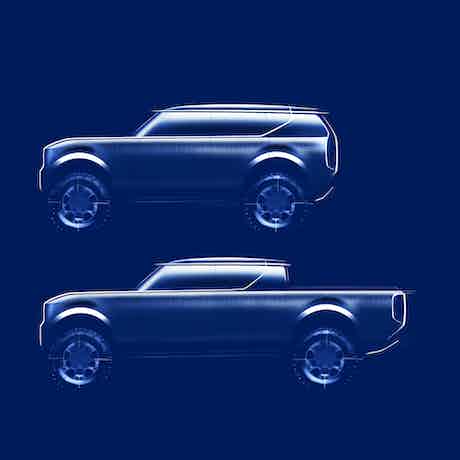 Volkswagen has teased a new electric SUV and a pickup truck for the US market, and they’re planning to revive the Scout brand of the 1960s. Read on for all you need to know.

Volkswagen has teased a new electric pickup truck and an SUV, and they’re going to be sold under the new Scout brand name.

This alternative to vehicles such as the Rivian R1T will only be sold in the US market, and production is planned for 2026.

Scout is going to be a new brand under the Volkswagen Group umbrella, and it’ll debut in 2026 with an electric SUV and a pickup truck.

Early sketches are all that have been revealed so far, and you can see that both vehicles look boxy and rugged. The SUV has been dubbed a “rugged SUV” or R-SUV, so you can see some large wheel arches and chunky tyres.

The pickup truck echoes the same design, with a squared-off bonnet and tall ride height. The original Scout of the 1960s was a utilitarian SUV built by International Harvester, so the new Scout models may have a retro design.

Very little is known about the battery options for the new Scout models, however they will be built on an all-new EV platform.

The new SUV and pickup truck may use technology from Volkswagen’s upcoming Project Trinity, which promises game changing battery range and charging times.

This would mean an improved range over the 322 miles you get in the current Volkswagen ID4. That car can charge from 10% to 80% in 38 minutes, and this would likely be improved as well.

Volkswagen has promised that the new Scout range of EVs will begin production in 2026, however it will only be available in the US market.

As for price, nothing has been confirmed at this early stage. You can expect to see the Scout SUV and pickup priced to compete with the Rivian R1T and Rivian R1S, so somewhere around £51,000.

Looking for the easy way to change your car? Then head to carwow. You can sell your car, and get a great deal on a new one, all from our network of trusted dealers and all from the comfort of your home. Tap the button below to get started today.