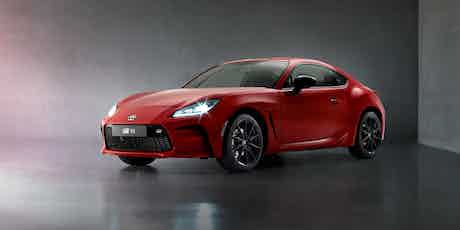 The Toyota GR86 has been revealed, with more power and improved performance over the GT86. Read on for full details of the sports car.

This is the Toyota GR86, a new car from Toyota that follows on from the much-loved GT86 sports car. It’s still mechanically similar to the new Subaru BRZ, and will be a higher-performance alternative to the Mazda MX-5.

If you’ve seen the new Subaru BRZ since its reveal earlier in the year, you probably had an inkling of what the Toyota GR86 would look like.

There’s unsurprisingly a ton of similarities between the two, albeit with tweaks to separate this as a Toyota. Upfront, it gets a bumper similar to the GR Yaris like its large grille and angular intakes on either side with the middle of the car almost identical to that of the outgoing GT86.

At the back, changes are a bit more drastic compared with the outgoing car. Curved new taillights feature and have a black strip connecting the two. There’s a ducktail spoiler as well, though the two exhaust exits have been carried over.

This prototype GR86 gets thin-spoke black alloy wheels, though it’s possible Toyota could offer a choice on the production car.

Good news for the enthusiasts out there, the Toyota GR86 sticks with a naturally-aspirated engine. This 2.4-litre ‘boxer’ flat-four unit produced 240hp in the Japanese-sold version GR86, allowing it to cover 0-60mph in 6.3 seconds.

No word yet on European specifications, though expect it to be similar with the probability of a six-speed manual gearbox being offered. An automatic version will likely be available as well if you’d prefer.

The Toyota GR86 is said to weigh just 1,270kg — about the same as a Ford Fiesta ST — despite remaining a four-seater.

That’s partially down to using aluminium panels for the roof and other unnamed body panels. Despite weighing less, the GR86 is said to be about 50% stiffer than the outgoing GT86, so it should handle a little better too.

Expect it to cost a bit more than the outgoing GT86, potentially around £28,000 for entry-level trims of the car.

Can’t wait for the Toyota GR86? Browse the latest GT86 deals or compare the best sports cars on sale now