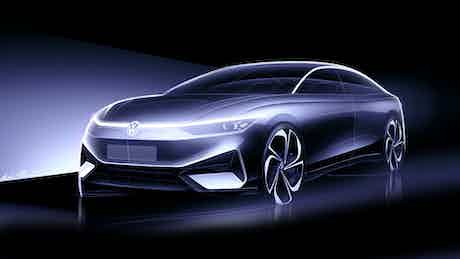 This sketch teases a brand-new Volkswagen ID Concept car that could be revealed as early as the 2022 Beijing Auto Show in April. It appears to show a new electric saloon that may soon replace the Passat.

Volkswagen looks set to reveal an all-new ID electric car. This official teaser image – a sketch shared during the brand’s annual press conference – hints that the new car could be an electric-saloon alternative to the likes of the Tesla Model 3 and the upcoming Hyundai Ioniq 6.

VW has been busy recently teasing numerous new electric cars. One has since been revealed as the VW ID Buzz – a cheeky retro re-imagining of the classic camper van that uses parts shared with the ID3 and ID4 hatchbacks.

Another is the elusive and mysterious Project Trinity (shown below). Though not much is known about this car, it’s expected to preview a 2026 production car that could represent VW’s ambitious next step in becoming a carbon-neutral car maker by 2050.

This latest teaser (shown below) appears to show a car that bridges this gap. Although it resembles a relatively conventional saloon car, like the Trinity, its design follows in the footsteps of Volkswagen’s recent ID electric cars.

The simple bodywork, trapezium-shaped headlights and full-width running light are all elements you’ll spot on the likes of the ID3 and ID4.

During the conference, Volkswagen confirmed that the Passat will eventually be replaced by an electric car called the Aero B. It’s possible this new concept hints at that car’s future design.

It was also suggested that this new Aero B model will be built using the same EV underpinnings (known internally as ‘MEB’) as the VW ID3, ID4 and ID5.

Currently, the top-spec VW ID3 comes with an 80kWh battery giving it up to 340 miles of the claimed range.  If VW’s upcoming Aero B electric saloon is going to tempt you away from the likes of the Tesla Model 3, it’ll need to come with closer to that car’s 374 miles of range.

Expect more details on this new electric saloon to be revealed soon – possibly as early as the Beijing Auto Show in mid-April 2022.

Can’t wait for the new VW EV? Check out the latest electric-car deals available through carwow. If you’re looking for an easy way to change your car, you can do just that through carwow, too. You can sell your car and get a great discount on a new one, all from the comfort of your sofa. Tap the button below to get started.