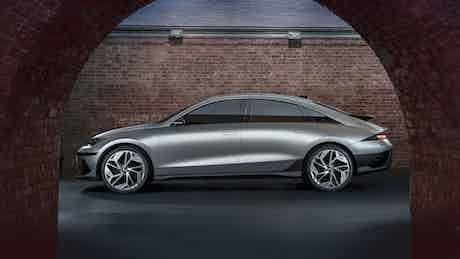 The covers have been pulled off the new Hyundai Ioniq 6. It’s the brand’s latest electric car and is a stylish saloon alternative to the Tesla Model 3 and BMW i4. Read on for full details…

This is the Hyundai Ioniq 6. It’s a brand-new electric saloon car and it’s an alternative to the likes of the BMW i4 and the Tesla Model 3.

It’ll be offered with either rear or all-wheel-drive, along with a 77kWh battery pack providing up to 379 miles of range.

The Hyundai Ioniq 6 picks up where the fabulous-looking Ioniq 5 left off. Unlike that car – which is a mashup of hatchback and SUV – the Ioniq 6 is a sleek four-door coupe-slash-saloon that looks more like a concept car than a production model.

Unlike some supposedly futuristic electric cars, the Ioniq 6 is a great example of how less can sometimes be more.

It isn’t covered in angular edges and hard creases and its elegant curves are punctuated by some slim pixel-like headlights and brake lights that can play a range of neat animations when you lock and unlock the car.

This pixel design continues on the covers for the rear-facing cameras – yes, the Ioniq 6 comes with cameras instead of conventional wing mirrors.

The Hyundai Ioniq 6 will be offered with two sizes of battery, 53kWh or 77.4kWh in the extended range model. Models fitted with the larger battery will have a claimed 379 miles of range, slightly more than you get from a Tesla Model 3 Long Range.

You can also use the same 350kW fast chargers as the Ioniq 5, meaning you can boost the battery from 10-80% in just under 20 minutes. The Ioniq 6 features vehicle to load charging as well, meaning you can use the car to power appliances such as cool boxes, laptops and even lawn mowers if you want to.

The new Hyundai Ioniq 6 will be available with either a single motor on the rear axle, or dual motors providing all-wheel-drive.

To see how this compares to a Tesla Model 3, watch the in-depth video review below…

Hyundai hasn’t announced power figures for the single motor version yet, however it should get around 228hp if the Ioniq 5 is anything to go by.

The Hyundai Ioniq 6’s interior borrows heavily from the Ioniq 5 – don’t worry this is a good thing. You get a simple dashboard design with a widescreen infotainment system consisting of two high-resolution 12-inch displays running Hyundai’s latest infotainment software.

The only real difference between the Ioniq 5 and 6 is that the new saloon has a fixed centre console, instead of the SUV’s sliding one. You’ll also notice the screens for the virtual door mirrors.

Watch the video below to check out a full in-depth review of the Hyundai Ioniq 5.

There are more differences between Hyundai’s latest electric SUV and its new Ioniq 6 saloon, but you’ll need to break out a tape measure to spot some of them.

The Ioniq 6’s wheelbase, which is the distance between its front and rear wheels, is 5cm shorter than the Ioniq 5 and its roofline is 11cm lower. It’s not a small car, though, It’s still 7cm longer than a BMW 4 Series Gran Coupe, and about 5cm taller.

How much is this all going to cost? Hyundai hasn’t confirmed any prices for the new Ioniq 6, however seeing as it comes with similar battery options to the Ioniq 5 it should end up costing around the same.

You’ll probably be able to get a single-motor car with a 53kWh battery for around £40,000 when it goes on sale later this year or in early 2023. Top-spec cars with a 77kWh battery and dual motors will probably set you back close to £50,000.

Can’t wait for this new Ioniq 6 to go on sale? Compare the latest savings on the best electric cars or see just how easy it is to sell your current car through carwow. It’s quick, easy and you’ll be offered a great price. Tap the button below to get started today.