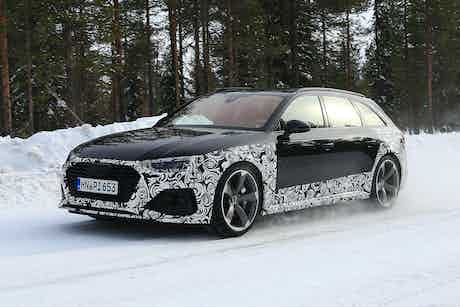 The facelifted Audi RS4 Avant has been spotted being put through its paces in Sweden. Read all you need to know about Audi’s supercar-baiting estate car.

You already know a new Audi A4 will be revealed later this year, but this is the first sighting of the pacey RS4 version as it’s put through winter testing.

The liberal application of camouflage wrap on this test car points towards the new RS4 Avant getting a slightly redesigned front end with a new grille and headlights, boxed wheel arches with new side skirts, and a revised rear bumper. These subtle changes will give the RS4 a more muscular stance than the old model.

Along with the more aggressive looks, expect more aggressive performance with the current model’s 2.9-litre twin-turbocharged V6 petrol reworked to increase power from 450hp to closer to 480hp. The current car goes from 0-60mph in just 4.1 seconds, so it’s possible the new model could do the same in under 4 seconds – a welcome performance hike given that a new BMW M3 will be launched imminently.

You can expect the big changes to be in the car’s cabin, though, where the RS 4’s infotainment will get completely revamped to bring it in line with new models such as the A6 and A8. That’ll likely consist of a pair of stacked infotainment screens one of which will feature haptic feedback that makes it feel like you’re pressing actual buttons not a glassy display.

For more on the new RS4 when carwow gets it, sign up to the newsletter at the top of your screen.