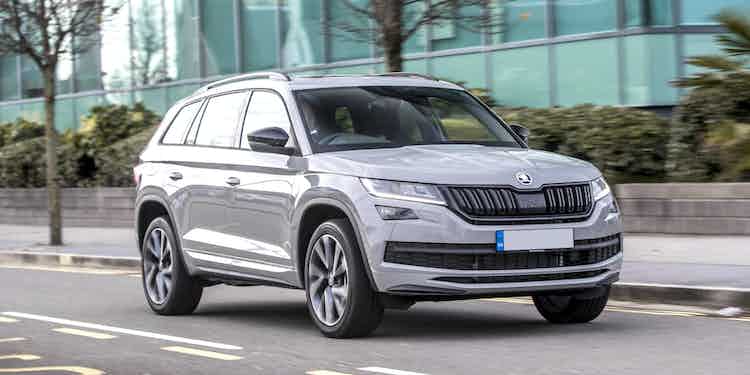 Equally vast is the Skoda Kodiaq’s paint options list – no less than 14 colours are available across the Kodiaq range. Keep scrolling down to check out our full colours and price guide for the new Skoda Kodiaq.

Black Magic is one of the fancier colours you can spec on the Skoda Kodiaq – because it’s a multi-coat pearlescent paint, it has an even deeper and premium-feeling sheen than a metallic black. Like all black paints, this is a colour that shows up dirt very easily, so it’ll need regular washes to keep looking pristine. Black Magic is available across the entire Skoda Kodiaq range.

As its name suggests, Business Grey is a no-nonsense and smart-looking colour on the Skoda Kodiaq – aided further by the shiny flakes that make up its metallic finish. It shouldn’t be a high maintenance colour, either, as dark greys are very good at disguising dirt that’s built upon the sides and bumpers. Business Grey is a colour you can spec on most Skoda Kodiaq models, with the exception being the Sport Line version.

Candy White is a colour with a solid paint finish, which means it doesn’t shine as much as the Skoda Kodiaq’s metallic white option. That said, this is still a smart-looking colour that suits the Skoda very well, and will also appeal to used buyers when you put the car up for sale. However, because Candy White is so bright, it’s a colour that will make it clear for everyone to see when you haven’t washed your car in a while. Do also bear in mind that you can’t spec Candy White on the Sport Line and Laurin & Klement trims.

If you’re after a less conventional colour for your Skoda Kodiaq, then Emerald Green is worth considering. It’s a dark shade that will appeal to buyers who want a more subdued look for their Skoda. Also, while green paints on cars aren’t as popular now as they used to be, a Kodiaq in Emerald Green shouldn’t be too hard to sell used. Like the previously mentioned Candy White colour, Emerald Green is available on most of the Skoda Kodiaq’s trim levels, but can’t be specified on the Sport Line and Laurin & Klement versions.

Perhaps an even more peculiar paint option than Emerald Green is the Magnetic Brown colour you see here. Not everyone will be won over by a brown Skoda Kodiaq, though this paint’s dark tone means it shouldn’t divide too much opinion. Plus, as it’s such a dark colour, Magnetic Brown should be great at disguising any dirt and road grime that’s built up on the bodywork. Magnetic Brown is available on most Skoda Kodiaq versions, though can’t be specced on the Sport Line trim.

It may look and cost the same as the Candy White paint, but Moon White does have a few subtle differences. For starters, whereas the former is a bright white, the latter has a subtle silver hue to it. It’s also worth pointing out that, whereas Candy White has a solid colour, Moon White is metallic paint, so it has a more noticeable sheen on a sunny day. Both colours require just as much scrubbing to keep looking factory fresh, though.

Brilliant Silver notwithstanding, Meteor Grey is the lightest of the Skoda Kodiaq’s three grey paint options. That means it strikes a good middle ground between being a light colour that shows off the car’s styling cues, yet is also neutral enough to appeal to the used market. As it isn’t a particularly dark grey, though, Meteor Grey will look a bit grubby if you don’t wash the Skoda very often. The only version of the Kodiaq that can’t come with Meteor Grey paint is the range-topping Laurin & Klement model.

Of the three blue paints that Skoda offers on the Kodiaq, Petrol Blue will appeal to buyers who’d prefer a more discrete look for their car. While this colour is less conventional than a typical black, silver or dark grey, it’s also muted enough to not make it stand out too much on the road. As it’s a darker colour, it also shouldn’t look too dirty if you don’t wash the Skoda for a while. You can have Petrol Blue on all Skoda Kodiaq variants bar the Sport Line spec.

The last of the Skoda Kodiaq’s three blue paint options, Race Blue is closer in tone to the vivid Energy Blue colour than the previously mentioned Petrol Blue. However, Race Blue isn’t too bright, so a Kodiaq in this colour shouldn’t be too tricky to sell on the used market. Unlike the other blue paint options, Race Blue is fittingly available on the Sport Line trim – meaning this colour is the only blue that’s offered across the entire Skoda Kodiaq range.

As its name suggests, Quartz Grey isn’t your typical dark grey – in certain light conditions, you’ll be able to make out a slight purple hue in the paintwork. This means Quartz Grey could be worth considering if you’re after a less conventional colour that won’t put off potential buyers come resale time. As it’s such a dark colour, it’ll also hide dirt and road grime very well. You can spec Quartz Grey on all versions of the Skoda Kodiaq.

It doesn’t have the outright sheen of the pearlescent Black Magic paint, though the metallic Crystal Black shade you see here is still a great choice if you’re after a classy colour for your Skoda Kodiaq. However, as is the case with Black Magic, Crystal Black can lose its lustre if you let the car get too dirty. You can spec Crystal Black on all versions of the Skoda Kodiaq, though do bear in mind it’s quite a bit pricier than many of the car’s other paint options.

If you’re after the most vibrant possible colour on your new Skoda Kodiaq, then there are worse options out there than Velvet Red. It’s a bright and distinctive colour that gives this big SUV a sporty look (especially when combined with the subtly more aggressive styling of the Sport Line model), and it also turns the Skoda into a bit of a head-turner. However, a Skoda Kodiaq in bright red may not be the easiest car to sell on the used market, and this colour also doesn’t hide dirt particularly well.