Latest BMW news: iDrive 8 for iX and i4 EVs revealed with over-the-air updates 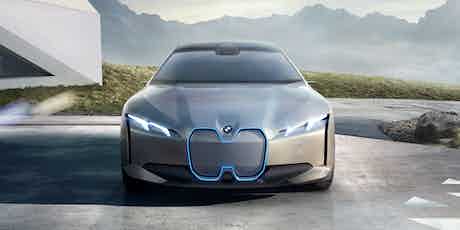 BMW has revealed new details about the high-tech iDrive 8 infotainment system that’ll be fitted to the upcoming iX and i4 electric cars. Read on for full details.

Click on the links below to jump to the latest BMW news.

BMW has revealed more details about the all-new iDrive 8 infotainment system that will first be available in the new BMW iX and BMW i4 electric cars.

In the BMW iX, the new iDrive 8 will come with a 12.3-inch digital-driver’s display and a 14.9-inch touchscreen that together form one huge letterbox-style screen. You’ll be able to customise these displays using the new ‘My Modes’ feature – all through an upgraded version of BMW’s ‘Personal Assistant’ voice-command feature.

The new iDrive 8 can automatically suggest music, navigation and climate control settings based on your driving history, and is capable of updating itself wirelessly in less than 20 minutes using the car’s built-in internet connection.

As in many current BMWs, the new iDrive 8 will come with Apple CarPlay and Android Auto connectivity. However, new for iDrive 8 are the integrated climate control menus. Instead of pressing conventional buttons to adjust the cabin temperature, you’ll use the on-screen icons or voice commands. For example, saying ‘Hey BMW, my feet are cold’ will tell the system to blow warm air into the footwells.

BMW’s first all-electric performance car could be based on the i4, the concept for which is pictured here.

BMW will be unleashing its first all-electric performance car in 2021 – the first EV to come from the famous ‘M’ division.

The manufacturer revealed the news while reporting its 2020 sales, stating: “During the year 2021, the BMW M GmbH will be presenting an electrically powered performance automobile for the first time.”

Read more about the new BMW i4

Nothing further has been confirmed about what form this car will take, so it could be an electric version of an existing car or a completely new model. But, with the all-electric BMW i4 set to arrive this year, it’s possible the firm could introduce a high-performance variant of that car.

Read more on the BMW iX

The BMW iX has been revealed as the manufacturer’s first purpose-built electric SUV.

Similar in dimensions to the X5, the BMW iX is powered by 100kWh battery that’s said to be good for around 375 miles on a single charge. A power output of 500hp (that’s more than an M3) is delivered to all four wheels through two electric motors, with the iX capable of hitting 0-60mph in under five seconds.

Although the BMW iX is strictly a five-seater, the floor of the car is totally flat so there should be plenty of legroom for passengers in the back.

There are no buttons on the dashboard, either, with everything controlled through a 14.9-inch central display. Though it offers touchscreen input, BMW has also chosen to keep a rotary control to help make it easier for you to use when you’re driving.

The BMW iX also features 5G technology built-in, allowing it to communicate with other cars on the road to share information on traffic jams, road signs and even parking availability. Autonomous technology is included as well, so the BMW iX can accelerate, brake and even steer for you on motorways.

Production is set to start this year with deliveries expected to begin in November. Pricing hasn’t been confirmed just yet, but you can expect to hand over around £70,000 for an entry-level model.

An all-electric BMW 3 Series could arriver fairly soon, with development cars spotted testing. This new car could be called the i3 and would follow on from the upcoming i4 electric coupe.Styling is likely to remain similar to petrol- and diesel-powered 3 Series, albeit with subtle tweaks made to reflect its battery-powered nature. Expect it to set you back from around £50,000.

Prototypes of the upcoming BMW 4 Series Gran Coupe have been spotted. You can think of this car as a half-way house between the stylish 4 Series coupe and the practical 3 Series saloon. Engine options are set to be lifted from the coupe, with the exception of the high-performance M4 3.0-litre turbocharged six-cylinder engine. Prices are expected to start around £35,000 when the model hits showrooms in 2021 or early 2022.

Get the latest BMW X2 deals

A new version of the BMW X2 has landed in the UK, called the M Mesh Edition.

Based on the M Sport X trim, this new model gets a supposedly ‘racing car-inspired’ grille, large inserts on the front bumper, extra cladding down the sides and painted wheel arches in ‘Frozen Black-Brown’. You also get 19-inch bicolour alloy wheels as standard, with the option to upgrade these to a 20-inch set.

LED headlights come at no extra cost, along with leather seats and an M steering wheel. A panoramic roof is available if you’re happy to pay a bit extra.

As for engines, there’s a choice of seven for the BMW X2 M Mesh Edition – three petrol, three diesel and a plug-in hybrid model. The latter can drive for around 35 miles in electric-only mode.

Pricing for the BMW X2 M Mesh Edition starts at £34,510, with orders now being taken. First deliveries are expected in March.

Though the latest BMW X3 M was only introduced in 2019, the high-performance SUV is already in line for some upgrades. A camouflage version of the car has been spotted at the Nurburgring race circuit in Germany, with styling tweaks at the front and rear likely to feature. It’s also possible the BMW X3 M Competition could be given a boost in torque (up to 650Nm) to match the upcoming BMW M3 Competition.

Get more info on the new BMW X4 and X4 M

BMW is gearing up to launch a revised version of the X4 coupe SUV in 2021. This facelifted model is expected to get an upgraded infotainment system (shared with the recently revised BMW 5 Series), subtly revised looks and some new mild-hybrid engines. The high-performance BMW X4 M will benefit from similar visual and infotainment upgrades, too.

Read more on the BMW X8

You’ll soon be able to buy a new range-topping SUV from BMW in the form of the X8. Though it’s expected to use plenty of components borrowed from the X7, it’s likely the X8 will take on a more aggressive design. Expect to see four-wheel-drive and an automatic gearbox as standard across the range, as well as a selection of high-performance petrol and diesel engines.

BMW recently confirmed it’ll build a high-performance M3 Touring. It appears visually near-identical to the M3 saloon – divisive grille included – and is almost certain to have identical performance specs to the Competition model in the UK. That’ll mean 510hp from its 3.0-litre twin-turbocharged engine.

Get full details on the new M5 CS

BMW has revealed the first-ever M5 CS. This 635hp super-saloon comes with the most powerful engine offered in any M car and accelerates faster than any other BMW on sale. How does 0-60mph in three seconds flat sound?

Read our review of the BMW 1 Series

For the very first time, BMW has a true hot hatch alternative to the Volkswagen Golf GTI in the form of the £32,995 128 ti.

Powering the BMW 128ti is a 2.0-litre turbocharged four-cylinder engine with 265hp. This power is sent to the front wheels through an eight-speed automatic gearbox. The new 128ti will cover the 0-60mph sprint in 6.1 seconds. There’ll be no manual option here, though. Sorry purists.

Besides some red trim inserts and ‘ti’ under the back doors, the new model looks pretty similar to the standard BMW 1 Series in M Sport trim. Things differ more obviously inside, where you’re treated to supportive sports seats with red backrest trim, a red ‘ti’ logo embossed onto the armrest plus plenty of red stitching throughout the cabin.

Orders for the BMW 128ti are now being taken.

Don’t want to wait for any of these new models? Check out the BMW deals page for the latest carwow offers or, if you’re not sure what to buy, get help choosing your next car.